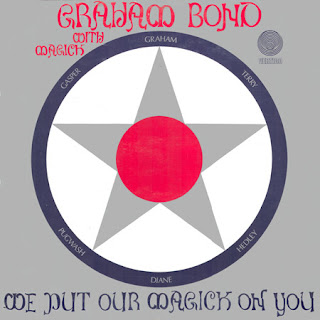 As appaling Paul Daniels used to say....."Now, That's Magic", noticably without the 'K', and this album certainly is Magical.
The Mighty Shadow himself, Graham Bond, wants to put his Magick, with a 'K', on us. Very nice of him, but he could have tried putting his magick on himself, then he would have been the pop star he so openly craved to be,and not the roadkill he became under the wheels of a subway train three years later!
The cover shows us that his wife(Diane) was determined for a second time to place the various musicians around the studion in accordance with their astrological positions in relation to the pentagram, or, he-he clever this.....Penta-graham.
Again the rhythm section of Pugwash(?) and Terry were on opposite sides of the room,but this time they seem to be tight and funky.On the previous "Holy Magick" album Rick Grech was most likely off his tits on copious amounts of Vertigo supplied drugs, or pissed.
I had a friend called Pugwash at primary school,just around the corner from where Rick Grech lived his last days.He was so-called because he had a constant crust of dried snot around his nostrils,'Pug' being the local word for said nasel bi-product. My now self-murdered 'friend', an 'orrible little oik called 'Tomo', who forced me to be his friend or face pugilistic retribution.Did a shit in his trousers one afternoon in art class,and eased the fresh turd down his trouser leg by waggling the appropriate limb until the offending stool dropped onto the floor next to Pugwash's desk. Like  the shitkicker he was, Tomo kicked the odourous item under Pugwash's chair.
His hand shot up in the air consumed with delight as he gained the attention of the pedagogue in charge and steered her attention to an obviously oblivious 'Pugwash'.
"Please Miss, Pugwash has done a shit in class", he informed with barely concealed glee.
Pugwash was forcefully removed and sent to the principles office after the obligatory visit to the bogs to wipe his innocent,and presumably 'shitless' arse.
Oh how we laughed for weeks on that one.
I next met Pugwash some twenty years later, when I produced my driving Licence at the local Police station after a speeding offence.The officer handling my case was none other than PC Pugwash himself,and I noticed he had a large tattoo on his forearm,with the word 'Tracey' proudly displayed in the centre of the swirling doodle of an art nouveau heart shape.He pretended not to recognise me, but I did take note that there were no longer any 'pugs' caked around his nose holes,and took care not to mention the 'Turd' incident.
This, kids, is how to handle yourself when in a Cop-Shop.
Ironically 'Tomo' chose to end his life in the very same manner as Graham Bond did,by throwing himself at the mercy of an approaching train.It was just that Tomo did it at Leicester railway station,and Bond ,Graham Bond, did it at Finsbury Park Tube station.
It could have all been so very different couldn't it? But then again there wouldn't be anything to write about if it all ended in roses like some crappy Hollywood movie, would there?

DOWNLOAD some magick on yourself HERE!
Posted by Jonny Zchivago at 11:30

Well, maybe Graham had a wee bit of magic hidden in him after all.. he did make it possible for you to share that absolutely amazing story with all of us, didn't he? Certainly something Little Marky, Father Yod, Jamra or even the mighty L. Ron himself couldn't have conjured. BTW, Graham's drummer Pugwash happens to be Welshman John "Pugwash" Weathers who played with The Grease Band, Eyes of Blue & Pete Brown & Piblokto! before becoming Gentle Giant's permanent drummer from "Octopus" on.
He definitely gets my vote for wildest caucasian drummer of all history. Just watch Giant performing "I Lost My Head" on Youtube & check Pugwash lurking behind his gongs decked out head to toe in full Oakland A's American baseball gear, then marvel as he launches upon his kit & transforms into the KING OF DRUMS (or at least the heaviest gingery Welshman you've ever observed pummeling a kit in perfect time). Later, he joined the greasy Welsh space truckers MAN & became their longest serving drummer ever, iirc.

Good to see there are open Prog fans out there. Looking back I wish I had been more open with my Prog credentials so i could piss the Punks off even more.
I'm tempted to do a month of obscure Prog Rock albums. That should put the final nail in this blogs coffin after all the cult stuff. I can segue into some after the Amon Duul posts coming up after Manson/beefheart in the cult series.