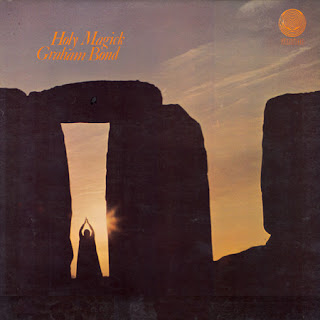 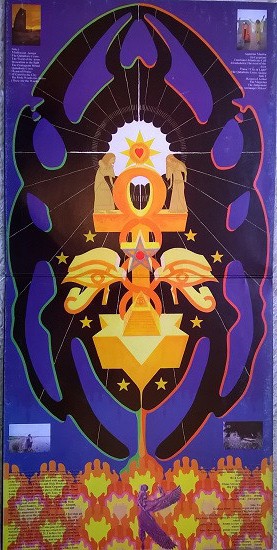 Graham Bond, rivaled the Yardbirds for producing musicians that would go on to greater and grater(sic)things, while he languished in poverty and had an unerring talent for failure. Ginger Baker, Dick Heckstall Smith, John McLaughlin,Jack Bruce,John Hiseman,all went on to have sucessful careers, while our Graham struggled with his weight, and became obsessed with Aleister Crowley (he believed he was Crowley's son!?).
Whereas fellow Crowley obsessive and,as yet,unarrested satutory rapist, Jimmy Page, made that dull over saturated hard rock crap with Led Zepplin, Bond was truly inspired to make a couple of albums of pure madness on prog label Vertigo.Incredibly,the money was there to indulge Grahams fantasies,and included a lavishly packaged gatefold sleeve.....mmmm nice!
Like a Spinal Tap sequence,during the recording, all the musicians had to stand in certain postions in a pentagram shape, that Bonds wife (Diane Stewart) had worked out based on their horoscopes. This led to the rhythm section standing in opposite ends of the room.(the bassist of which was Rick Grech,who lived his last years of his life in a wheel chair a few doors down from me on the council Estate in Leicester where i spent my formative years)
This inevitably caused a slight wandering in syncopation that some would find amateurish,but not your faithful scribe;it makes this album as great as much as it was a massive failure commercially.
Graham treats us to a bit of 'Atlantean' as his husky growl squeezes out the lyrics, "Lashtal.......Attah, Malkuth, Vega-Burah, Vega Dulah, Leolame, Amen."
Messing about with the Occult in the medium of Progressive Jazz Rock is not recommended.Especially as our hero was mysteriously hurled in front of an approaching train in the london Underground at Finsbury Park Station........it could have been Suicide I suppose? In fact, yes it was Suicide.Mess about with the Occult if you want, nothings gonna happen either way.

DOWNLOAD as if by magick HERE!
Posted by Jonny Zchivago at 00:16

Looking forward to this one! However, I only see 7 tracks in the archive.

Hi, I put the wrong tracklisting down.
This version doesn't annoyingly split side A into all the constiuent parts.Leaving the suite as one long track. I had a cd version which did that,a very annoying listen.
so 7 tracks is correct.

Awesome, thanks for the clarification. I am grabbing the other one too!

Yeah, these albums are beyond great.....have you got 1968's 'Love Is The Law'?...thats up next....a bit more commercial than the Vertigo albums.

i wondered how you were going to seamlessly slide back into "real" musick again!

I'm not sure there's very much 'real' musick on this blog at all? But Bond definitely is real. I'll eventually get back to that mountain of Industrial cassettes (Yawn), i just want something interesting to write about,like cults who make weird music, is that a crime?
Sorry, but there's still more to come....witchcraft...exorcism....i'll draw a line at voodoo. Then back to proper moozik.

The pleasure about blogging is doing whatever you like, not following the desires of "proper music" whiners i suppose.
Maybe you're expected to unearth an entire box of Adam Clayton bass solo tapes or your grandma's gong lessons and then happiness will come back to the earth.
Ok, I have to the record store and browse the "proper music" bin, try to find some Throbbing Gristle or something.
Cheers, keep the trip so great.

The very prospect of a box of Adam Clayton bass solo's brings into question the right for humanity to exist. A crime against nature would be such a discovery.It would be my duty to burn them on site and send the remains into space.
The trip continues.