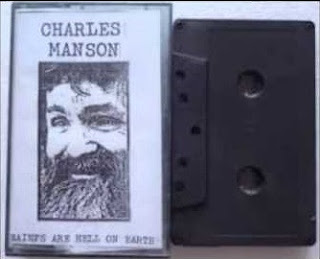 At the vast expense of the American taxpayer, we bring you the despicable Charles Manson feeding his ego and still commiting heinous crimes against music, while encarcerated in an American correctional facility. Not that he ever did, but he never had to work again,while at the same time still chase his dream of being a pop star......well,at least to be an unpopular star,which he undoubtedly is.
Recorded in 1985 in San Quentin Prison, California.The sleeve notes state that this recording was recorded under imperfect conditions and had to be smuggled out and that technical limitations are quite apparent.

Manson, nee Maddox,probably saw himself as a repressed anti-social artist who has been jailed to stop his messages of revolution spreading dissent across the civilised world; like a scummy Plastic People Of The Universe, but without the talent or the right.
What right this creepy twerp had to even have a guitar in the big house is as crazed as one of his frequent demented telephone monologues to local radio stations.Especially as the authorities knew what crimes he was capable of with such a blunt instrument in his hands.
These eleven wobbly country flavoured peons to himself,with a constant backing of murmuring inmates, are among some of the strongest arguments for the reintroduction of the death penalty I have yet heard.

DOWNLOAD saint charles of hell on earth HERE!
Posted by Jonny Zchivago at 01:09

I love Charles Manson, his music inspired me to start playing guitar and to take on environmentalism. He is constantly lied about in mass media, the story they tell you is full of holes. They made a whole lot of money off of Charlies name and used the case to start the war on drugs. Real criminals are in the government. CHarles Tex Watson is the murderer, not Manson. Blaming Charlie and LSD is lazy and incomplete, if someone tells you to kill and you do it, you are at fault. Anyhow, "Way of the Wolf" and "Commemoration" are my favorite albums by Manson. RIP

Yes, someone wrote that!? Suitably Unknown.

How about some Bobby Beausoleil next then? That might neutralise it

Sounds like Unknown just couldn't be without a savior, all lied about, persecuited and misunderstood and everything Pheeeeeew.

and yeah, poor lickle misunderstood and persecuted mass murders of the world unite.We'll start a petition to let you all out....shoot...too late for you Chuck.Shame.

ps Unknown:
"... if someone tells you to kill and you do it...."..Quote......makes both parties guilty of conspiracy to murder. Basic law fact.
Manson has many times admited he told them to go and do it.He's too thick to realise that has incriminated himself many times because he can't keep his big mouth shut.