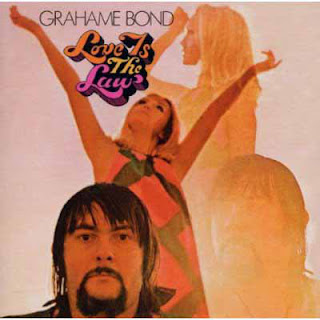 Following the dissolution of The Graham Bond Organisation, our Graham went to the USA to try and 'make it.'
After a struggle,and few gigs, Pulsar records offered to release an album.The result of which was this Crowley-esqely titled record, "Love is the Law",on which they somehow managed to spell his name wrong!?
Crowley also said, "Every man every woman is a star", except Graham, it seems, as the record bombed. There was not much call for chubby pop stars in the valleys of LA, which would explain why he became a permanent fixture at Mama Cass's house.
"Where's my Graham!", she could be heard screaming when he wasn't there to suck up to her.
Bizarrely they both met an early death in London within a couple of weeks of each other in 1974!In her case, no, she didn't choke on a ham sandwich as pub legend prescribes;but, strangely, she did die in the same room that Keith moon also expired in a few years later.
Had they been dabbling with the Dark Arts? ...we'll never know. I'll dig out my Waddingtons Ouija Board to ask Graham directly.......He said "Not the dark arts, it was the dark arse"......sense of humour intact then Mr Bond? Even in the after-life,hell or whatever?
This album is his most commercial attempt at extoling the virtues of Magick,backed up with the finest Californian session musicians.
A very soulful psychedelic blues outing that, if made by someone more photogenic would have hit the billboard chart at a healthy  number 666.
After one more ,Magick-less album,his visa expired and was required to return to the UK (i.e. Kicked out), where he went onto much stranger and darker things.Eventually ending up as Ginger Bakers's side-kick in Ginger Bakers Airforce.The ultimate humiliation.

to DOWNLOAD is the law HERE!
Posted by Jonny Zchivago at 11:46

Thx for Bond albums. Actually Graham plays all instruments himself on this album only backed by legendary drummmer Hal Blaine. And yes, what can be more humiliating than playing ground breaking Afro rock with dilettantes like Ginger Baker, Steve Winwood and Denny Laine.

Afro Rock = groundbreaking?....only if its done by white men apparently. Africans were doing it years before, in fact they invented s0-called 'rock' did they not?
So, yes,humiliation in bucketloads, especially the Denny Laine part.

Do you happen to have the satanic folk album by Fred Kuhn? Thanks in advance. https://www.discogs.com/Fred-Kuhn-and-Light-A-Song-Of-Gods-Gone-Mad/release/7584800

Satanic Folk, now there's a genre.
Yes i have that,Fred Kuhn and the Light....will upload and paste a link here for you.

If I ever ended up being a sidekick for Ginger Baker in any forum, I'd know my time was nearly up too. Satanic folk...there's something I've never contemplated, but it makes perfect sense. If anything, Chuck Manson was that, probably only because no one ever dared hand him an electric anything. 2nds on Anon's Fred Kuhn request, bring it on son of Zchivago.

If he was in another state, i'm sure they'd have handed Charlie an Electric Chair to do a solo on, or while he gave a last rendition of Cease to Exist?...click the zippyshare link above for the satanic folk...folks.

Dear Jonny,
can you please re-up Fred Kuhn? Thanks in advance.