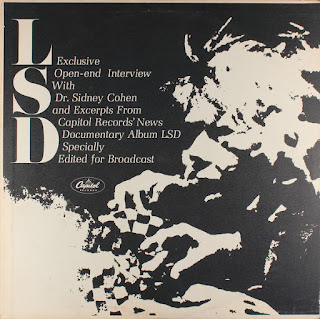 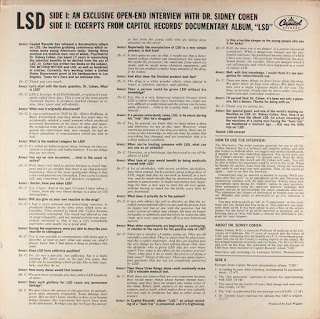 This is the companion release to the other LSD documentary album (LSD - A Documentary Report- 1966 Capitol Lp).
It was released to radio stations to promote the lp and contains an "open-end" interview with Doctor Sidney Cohen, M.D..
This "interview" is similar to the open-end interview album released by the Byrds to promote the "5D" album where DJs would play this record and have a list of questions that would be "answered" by playing back the record,or even better ,you could conduct the interview yourself and make believe that you were there? An ingenious way to promote both the album and the drug, saving the artist a lot of time and travel;even though the artist,if on LSD would have had all the time in the world slowed down and should be able to travel around without leaving the room. It also contains several excerpts from the released album.

An Exclusive Open-End Interview With Dr. Sidney Cohen
Interviewee – Dr. Sidney Cohen 12:13
Excerpts From Capitol Records' Documentary Album, "LSD" 15:48
Side B:
1. A Reading By Poet Allen Ginsberg, Accompanied By Psychedelic Music
Voice – Allen Ginsberg 2:47
2. The "Lost Generation" Expresses Its Excuses For Experimenting With LSD 2:36
3. The Source For The Market Of Users, Their Dosage, And Some Over-dose Results 4:05
4. The "Trip" As Experienced By Two Teen-age Users Of LSD 3:38
5. Dr. Timothy Leary Expresses His Opinion That LSD Is Religion
Voice – Dr. Timothy Leary 2:17

DOWNLOAD by clicking this tab HERE!
Posted by Jonny Zchivago at 10:12

I keep wondering if Art Linkletter's ever going to show up here. He was some sort of expert on LSD, right? He thought so anyway. Perhaps there's a cult there somewhere. "Kids say the darnedest things..."

I've been wanting to hear the LSD album on Captol for a long time, didn't know about the interview disc. I guess I'll be an expert on the subject too after it's all done.