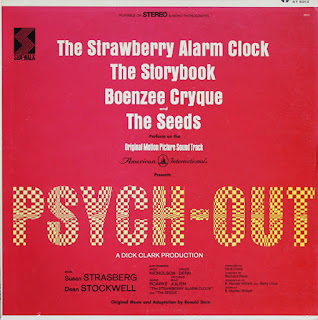 The Psychedelic Brat Pack, Jack Nicholson,Bruce Dern,Peter Fonda, and Dennis Hopper, were never out of work between 1966 and 1970.There was seldom a biker movie or a Psychsploitation flick that at least one of them wasn't in.
This one had Nicholson and Dern in it, fleshing out the bits in between the party scenes and the largely faked Psych groups. One of them, Boenzee Cryque was responsible for the greatest ever inverted and backwards version of 'Purple Haze' ever made(no royalties for James from this album methinks?).....if there was a second one I need to hear it before I die,or tye-dye!?
Amazingly, The Strawberry Alarm Clock were an actual group!? Which I find quite amazing!?....I just love their watered down sunshine Psych-pop immensley.
The Seeds were slightly past their sell-by date by 1968....very 1965 garage punk.But Sky Saxon ,singer of the Seeds) did manage to go and join the Father Yod Family in Hawaii a few years after this,and helped make some genuinely Crazed music.
By 1968,the kids were tiring of songs about colours,flowers and love,so started going back to the boring basics and dressed like 'The Band'.
By the time this movie came out it was becoming 'soooo yesterday maaaaan',but fuck that, I love it.

DOWNLOAD and get yer psychs out HERE!
Posted by Jonny Zchivago at 10:20

You're damn right there Mike.
Was gonna post "The Trip" too but the soundtrack is a bit shit.....good movie though.
"Beyond The Valley Of The Dolls" is my personal fav. for obvious reasons. Coming up very soon.

Dear Mr Z,
thank you for pointing our attention on psychsploitation (not psychedelia?).I love those cheap 60s drug movies. When it comes to music, it seems like the pretended stuff like italian soundtracks is much weirder than alllegedly authentic rock music.The fake being more real than the original? Looking forward to the prog rock you announced earlier.

Psych out may have at least one genuine group in it,even though i did have my doubts about their credentials before,so that fact and the hollywood connection for the naffola script etc defines Psychsploitation.
Most Italian soundtracks and library music is well weird.....as is Italian Prog,which i hope to do a series of in the future 'cus i love it.

Yup, Strawberry Alarm Clock were not only an actual group, but their lead guitarist Ed King went on to join Lynyrd Skynyrd and pen "Sweet Home Alabama" for them swamp gators.

Have any of the 60's Hell's Angel's soundtracks? Angel's from Hell i believe, it had the Lollipop Shop on it w/ Cole on gtr/vox on it (fast forward decades later Cole and his wife Toddy were leaders of dead moon,pierced arrows and Toddy&Cole there accostic project. I filmed there last show which was just a Toddy an Cole show in Seattle in front of only 20 people on a Sunday night. This was after thy played Peireced Arroes Bumbershoot set where Cole Passed out and fell out and hit grounf mid song mid set. Which was only 20m slot. Started day2 and after them was Melvins who looked very concerned but played nuts. Faith No More ended up ending the night w/ rain pouring outside and hardly a crowd but was amazing. Better than there Paramount show,which was there 1st show in 20 yrs here. Was a odd fest w/ badjuju throughout. whatever sorry for getting sidetracked

what happened to pysch out? bummer

Nothing's happened to Psych Out...try mediafire more than once and they let you through...its a promotional thing they do.