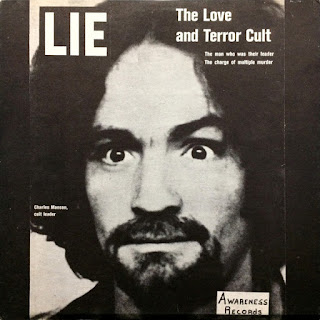 Under instructions from old jailbird buddy Charles Manson, Phil Kaufman released this album of songs by everyone's least favourite Hippie as chuck awaited trial.
The cover is a parody of 'Life' magazine's edition on the Manson murders......who says Hippies don't have a sense of Humour?
This kind of smug long haired protest folk is the best argument i have heard yet that Manson should have been executed without trial,preferably beaten to death with an acoustic guitar.
As for the turds who have recorded numerous cover versions of these shit songs, like probably the worst carbunkle on the arse of pop themselves, Guns'n'Roses, and other lesser twats; I hope your exceedingly crap back catalogues 'Cease to Exist',just as your counter-cultural hero has.
"People Say I'm No Good" warbles Manson.Probably the most accurate phrase he ever uttered.
The sad thing is that if some record company man had said this stuff was good,fed his pathetic ego,and signed him up, Sharon Tate,her baby and the other victims would still be alive,mirroring Hitlers rejection from Vienna's School of Art.
Somewhere in Hell there's a super group with David Koresh on lead Guitar and Vocals, Charles Manson lead Vocals and Rythm guitar, with The People's Church Choir providing the backing.....now that would really be a Hell to be truly feared.Especially if they were doing an endless medley of U2 and Guns'n'Roses obscure B-sides!!!!!?

DOWNLOAD this lie HERE!
Posted by Jonny Zchivago at 11:20

alright Jonny, you´ve taken us further down as promised...still sampling these series of demented posts, considering that they are for real...at best, the ideals of some utterly twisted mofos, at worst, bait for the unsuspecting, concealed evil for the weak...the results, as expected...

thanks for the ride...

Not much to say, 'cept the labels at the bottom are a hoot: "Charles Manson, Hippie Bullshit, Hippie Folk," The only other item that all-star band of hell might need is an accordion.

i'm still waiting for the day you post something that you actually like!? or is everything just nothing but negativity for you these days?

Anonymous....who could possibly like charles fucking manson...he's a twat.....also theres lots of stuff on here that i have demonstarted a liking for....delve deeper my friend.

Rev B....granted...accordians are one of thee greatest evils ever to have been foisted upon man-unkind.

certified.....it will all end soon. this was a rewsult of me doing posts of my favourite guitarists believe it or not...that coupled with boredom of so-called 'good music'.....as Capt Beefheart also qualifies for Cult Status, he will be appearing soon,especially as its fifty years since trout mask...amon Duul too...very manson-esque.
I hope i haven't introduced some dodgy influences for the weak minded,but...hey...that's life innit?

I do hope this cavalcade of delusional egocentric tone-deaf demagogues is leading inexorably to Psychic TV.

There was a reissue of this in the 80s to cash in on psychic TV or something, they got it in my local record shop and I sort of wanted it but it was too expensive. It sat there for weeks and weeks and if nobody bought it soon it would get reduced and I would buy it but then the whole shop burned down

Sorry, Psychic TV is too delusional and egocentric for this cavalcade.

The reissue was on William Bennetts Come Org label......i suppose it did get reduced in a way...to ashes.
Let that be a lesson for you 1/don't buy records;and 2/ don't buy records by evil murdering scum.

I must issue a warning,that expressing contempt for the gift of 'Tone Deafness' is not usually allowed to pass without censure.....but in this case you escape with just a caution.

Charlie Manson, the bloke with the changing swastika tattoo and fake prison cell. CIA agent and actor, like the rest of his crew. Dozens of high profile interviews with Manson from prison including Charlie Rose, Tom Snyder, Diane Sawyer, Geraldo...where he is wearing jewelry, long beards, long hair, sunglasses! and is entirely unrestrained and dominating the interview or in a straight jacket. The constant media reinforcement of the Manson mythos for decades is evidence of the agenda. Manson is releasing music, audio tapes, and books from prison and so are the other 5 convicts. Interview where they are wearing makeup and street clothes, some producing and starring in films (Bobby Beausoliel) others having children from maximum security prison (Tex Watson had 4). I've got blisters on my fingers.

I'm getting blisters on my eyes reading this.
Have you for one moment ever thought that Manson could possibly be real? And his swastika tattoo only moves in someone elses mind? The TV interviews only prove the ghoulish fascination the american public have with criminals in general. A misguided policy from the authorities to allow access to these creeps.Doesn't happen anywhere else in the world....rather like those ridiculous gun laws/mass shootings.
Its the secret govt agenda...of what...spreading fear?....plenty of that already...anti-drugs...it ain't working. Nothing the govt has ever tried to do secretly has ever remained secret. People have BIG mouths.