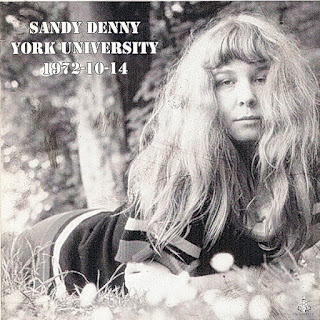 Yep, it's 43 years today since Sandy Denny's life support systems were turned off, following a brain hemorrhage probably incurred after falling down the stairs of a rented cottage in Cornwall while on holiday with her parents....better known as the two middle aged persons on the front cover of "Unhalfbricking" ...and hitting her head on the stone floor.Falling down some stairs was something she tended to do quite regularly apparently. She was discovered, by chance, at a friends house unconscious on the floor.She never regained consciousness,and basically died alone......Sandy would not have liked that eventuality at all.
I should write my own Candle In The Wind" for her really I suppose,as like Reg, I was just a kid when she ,the bucket, did kick. Ironically, 'twas Elton's entertaining performance at the Albert Hall in 1970,supporting Fotheringay, that was the final nail in the coffin for Sandy's ill-fated band of chums......so thanks for that Elton you fat bastard. Choosing an act whose specialty was audience pleasing entertainment as support was rather ill-advised for Sandy's preference for the add doomy lyric and a group not exactly renowned for jumping around too much.
It was also Sandy's flaccid contractual obligation recording of "Candle In The Wind" as a desperate single, that ended her tenure on Island, and likely her career.I'm sure she could have made a comeback in the nineties however,June Tabor managed it.
However detrimental the break up of her group was for her confidence and drinking problem, I prefer Sandy Solo,with minimal backing...check out her Demo's for justification.
This solo concert at York University,is classic Sandy, nervously joking between songs,but the joking stops when she starts to sing.
Its got another nicely doomy version of "Late November",my personal fave,which recounts the fatal Fairport Convention bus crash on the M1 in late november 1968,for which she never got over her survivors guilt,but at least it got channeled lyrically.
Hard to believe she would have been an old lady now,although she smoked like a chimney and drank like a fish,so that's debatable. Alas, she remains another case of die young and stay pretty.
Tracklist:

1 It'll Take A Long Time
2 Bushes And Briars
3 Sweet Rosemary
4 It Suits Me Well
5 The Sea Captain
6 Tomorrow Is A Long Time
7 The Lady
8 John The Gun
9 Quiet Joys Of Brotherhood
10 Late November
11 The Music Weaver
DOWNLOAD one the few things worth going to university for HERE!
Posted by Jonny Zchivago at 07:43

I started studying at York University in October 1972, but have no idea that this gig happened... must have had other priorities... thanks for stirring some other memories! Milly's Grandad.

If Sandy Denny was still alive she'd have a career, albeit of the ghastly late-life cultish performer with celebrity fan club kind: duet with Nick Cave, trip-hop collaboration, BBC4 documentary presented by alternative comedian etc. So would Nick Drake.

Thank you for your continued learnings. Really appreciate your blog. RIP Sandy.

Why don't midget women use tampons? Because they trip over the string!


Sandy was amazing and I could never stop gushing about how great of a singer she is, big big BIG fan of her BBC sessions

You've mentioned it before Jonny but that has to be Sandy's most superior hair style.

Philip Johnson - you are bang on the money, sir.

Still, better a fully-lived life than a curtailed one.

John John was that an entry into my most offensive joke competition?

Shug...a fine hair style indeed,and clearly she did it herself.

Philip Johnson....Her name was tailor made for Jools Holland to introduce on the same night he has Nick Cave on,who,of course, insists on crooning a version of "Who Knows Where The Time Goes",with our Sandy...who appears far too grateful for the opportunity.
Nick Drake was on the show the previous week, duetting a version of "Black Eyed Dog" with Lady Gaga,who evidently believes that she discovered him.

Many, many thanks for the Sandy. Fantastic blog.


Started at Bath University in 1972 and Sandy Denny (as part of the tour including York) performed at the freshers ball - support act was the The Flock - bit of a mismatch. This recording is a great nostalgia trip - pity the Bath gig has never appeared on tape. A great blog - only recently discovered by me.

Was also there, although don't remember the support act!