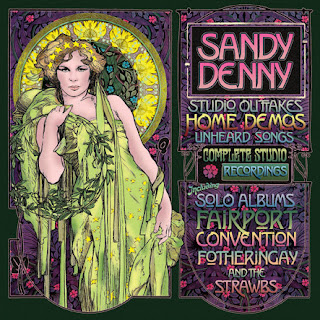 These are the "Studio Outtakes ,Home Demos ,and Unheard Songs" section of that massive 19CD box set of everything Sandy recorded ever!?..which would set you back quite a few hundred quid,mostly for stuff you already have...but not these 127 intimate versions of her future studio work,plus songs that were never heard beyond Sandy's various living rooms.Everything from Fairport to Fotheringay,from the Folk Club years to the record company compliant Adult Orientated rock of 'Rendezvous',is here in a superior, stripped down form with Sandy's perfect Voice whispering in your ears.Its like she's in the room singing you to sleep......i'm welling up now!.....just don't tell me mates!

As much as I love the punk rock and the new wave and the weirdo offshoots of both, my all-time favorite album is Liege and Lief by Fairport Convention. Thank you for making this available!!!

Also , in the colonies we have this actress Sandy Dennis. In Splendor in the Grass and Who's Afraid of Virginia Woolf. I always associate the two, obviously because of the name. but they are similarly on the outside kind of. They are both said to be "under-rated" while at the same time being mega-praised, worshiped and canonised.

I wouldn't say that Denny, not Dennis, was under-rated ever, more a case of over-looked. She certainly deserves to be canonised for her work, although reading her biography she certainly was a bit difficult at times,and probably an alcoholic.....I do worship at her altar though.She also had the uncanny knack of looking different in almost every photo.

indeed ollie, Liege and Lief by Fairport Convention is one of those few albums on the short list of the genuinely innovative.Voted 'most influential' folk album of all time by one of those silly awards ceremonies....sometimes they get it right.

Whoa, thanks a mil for this.

Great work, many thanks !

Yes, overlooked.That puts it better, in both cases.

@northfieldhat -- I LOVE Sandy Dennis. Many years ago I befriended a woman virtually identical to her--it turned out to be her _niece_. She actually spent a good part of her childhood living with Sandy, so I was in heaven.

Re: the other Sandy (Dennis). Check out _A Cold Day in the Park_. Early Robert Altman film. Chilling and fucking awesome! Oh, yeah, also _The Fox_, based upon the DH Lawrence story. Also chilling, but in a different sorta way.

@parmalee.... blimey, i'm well jeal...although I realised recently that my missus resembles Sandy Denny from about 1971,long curly blond locks and floral dresses,but older naturally....maybe this was why i was attracted to her? She hates piano's however...had several bad experiences with the instrument in question.