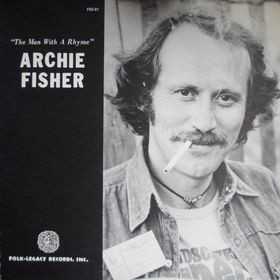 What does 'Sister Ray' mean to you?.....No not The Velvet Underground, obviously the late Sister Ray Fisher,sibling to the more successful Archie Fisher; both members of Scottish Folk Royalty The Fisher Family.Archie, as it says, is the man with a Rhyme,and he penned quite a few popular contemporary Folk tunes that garnered an audience in the States, United of...!
Archie is also the man with an MBE,awarded for services to Folk music in the 2000's.
He does a nice line in gentle, acoustic folk,and manages to sing in various accents, both Scotch and English; a fact that would make many a kilt wearing Scottish nationalist bigot spin in his shallow grave.
Archie realised we were all the same people on that wretched Island.
Tracklist:

I've seen a bunch of releases on this label over time. I've always been intrigued but never know where to dive in. On your suggestion, this'll be the one. So far so good. Anything that makes a bigot spin in his/her shallow grave is fine by me. Appreciated as always.

Oh come on now you silly boy Rev B ... are you suggesting that anyone who doesn't want his country ruled by a different country is somehow a "bigot"? Someone who lives in a sovereign nation yet finds themselves ruled over by the elected leader of a different nation (we've had to endure the evils of Thatcher, Major, Bliar, Brown, Boris Johnson etc...). Not being happy with that is somehow being "a bigot"? Away an' bile yer heid!
Seen Archie Fisher many's a time up here beyond The Wall, beyond the Grapeline and beyond hope! His version of "Norlan' Wind" is breathtaking! This here is a lovely album.
Archie is quiet vocal on where his sympathies lie... and he doesn't praise Westminster, Boris Johnson etc.

Midge you are disorientated...can you not recall that a general election involves scottish votey people too? And you get to vote for your own parliament too?....unfortunately that gives you the abysmal Sturgeon as your leader. As for sovereign nation,and according to the rules of Pointless "And by 'country' we mean a sovereign state that is a member of the UN in its own right"////hmmmm .no Scotland there then .or England for that matter. Maybe i should learn some bigotry and campaign for independence for England...but like Scors,who can't wait to get away from their beloved homeland.I left England twenty years hence,for France...which is also shite,but now I'm stuck here.