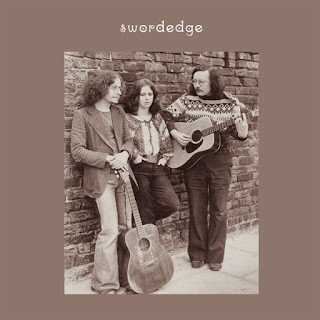 We look back at 1980,and dream up images of the public walking around looking like Joy Division or The Birthday Party.The fact is that everyone looked like Swordedge,.... except for hip dudes like me of course, I was always embarrassingly too cool for school. I envy Swordedge,who had the guts to walk around the north east of England looking like that......that's real COOL with a 'K' in my book. When I....Yawn...went to see The Clash in 1978, like a twat, the whole audience, save a few clash clones in the front looked like this. Long greasy hair in a side parting, non-mohair woolly jumpers and flares. Exactly the kit that real outsider Punk Groups wore,Johnny Moped style.
I'd love to go back to 1977 and form a Folk group ,not that i can play guitar good enough,or sing, but the sheer 'Up-Yours'- ness of it would have been impressive.
Also, while the DIY Punk groups were getting deals with Rough Trade and Virgin, charming folk trios like Swordedge were laughed out of town."You guys should be on the stage....the next stage OUTTA HERE!"
So they had to actually, really, 'Do it' themselves.Saving up a tenner a week from their jobs with the council Social services and Citizens advice Bureau's, maybe even,as trainee teachers, to record and release their own album. Swordedge's eponymous effort being an exact reflection of life for real people outside the music press,being a prime example. It was always the Folk scene,both trad and prog, that actually lived the Punk Ethos as eulogized by......ugh!That name again!...The Clash, and other part-time evangelists of the Epoch. Supporting the Clash that notorious evening was some actual 'Real' Punk, by Suicide,who made real inner city Folk music from New York City. Ironically Joe "Woody" Strummer was in fact a self proclaimed Troubadour before he saw Dr Feelgood,boring everyone with his renditions of Woody Guthrie songs. Probably where he got his predictable Politics from.......yeah you guessed it, I don't like the Clash.....good debut album though, but....!
Musical outsiders for 1980, Swordedge's material, was strictly 'Trad'.Zero self-penned ditties in a Folk-Rock stylee.....and why not? Rather pleasant Stuff,but their actual existence in the Post punk continuum, boths amuses and titillates.Sometimes being a Naff bastard is Kool with a capital 'C' or 'K'.
Tracklist:

1.Rosemary Lane
2.No Pain
3.Squire Of Hainborough
4.My Ladye Constance
5.Brave Wolfe
6.Greenfields Of America
7.Party On Mars
8.Voilà Le Printemps
9.The Pavement Artist
10.The Shearing's Not For You
DOWNLOAD something totally not edgey HERE!
Posted by Jonny Zchivago at 23:14

You are so right about the folk bands of 1980 era. I was really into NWOBHM (Please forgive me), but I only got to see those bands supporting big groups in concert halls. However I like a pint of beer or 2, and on a Sunday our local pub had folk bands (all looking like Swordedge), the pub would be jam packed, with all ages 18-80, and after a few weeks I really got to enjoy the folk music. Some was traditional folk but also the occasional 'odd' hippy folk. I listen to folk music much more than NWOBHM these days :-}.

There is nothing cool or kool about any of this folk stuff. These are just people who have no imagination and little musical ability. You went from Japanese Free Jazz to this stuff? I now question all of your posts and come to the conclusion that you are a pretentious t w i d.

You're so right! Again! Like the millions who claimed to be at Woodstock, so many claimed to be Sex Pistols fans. A rock journalist friend of mine observed in a 1988 article that,in 77,if people had really bought the Sex Pistols album, they would have homes in the Hollywood Hills, not Fleetwood Mac.

(Of course, now they do have homes in the Hollywood Hills. Even Sid. Johnny and Steve saved his ashes, put 'em in an hourglass, and that way he can still be part of family game night when they play Boggle™.)

I have loads of imagination. i'm Unknown. Doesn't get more imaginative than that. Even Dylan knew the folk thing was a dead end, but the Brits were "religious" about it and called him.., well obviously you know all about that because you probably called him the J word right along with the other Koolaid drinkers. Really i like your blog but i dislike these latest posts enough to make a negative comment on them. Not fighting words here, just criticism with a bite. Bring back SPK, TG, or shit even Jandek who is close to this yawning 6 string blue jean grass eating thing but would rather paint his teeth than green his sleeves.

Nah Unknown Nah!....i'm bored shitless by that industrial shit...although you may find some SPK on the shadow blog....that shits for Vinyl On Demand buyers.
I like stuff that winds up all those too weird for beards knobs. If this stuff offends any Harsh Noise fans, then its worth its place on this blog....ps...this bolog isn't necessarily about stuf I like.If i can write about it ,and its Diy-ish, then its good enough for me.
Yes, Jandek is Folk...or rather used to be folk before he sold out for fame.
If anyone says they love free jazz in my company, i immediately lose interest....they are either pretending to impress me and others, or a lying bank manager....although i love it too,i keep it to myself,just like homosexuals and christians should do.
But the worst are old punks....fuck them.
Negative comments are ok by the way.
Cheers