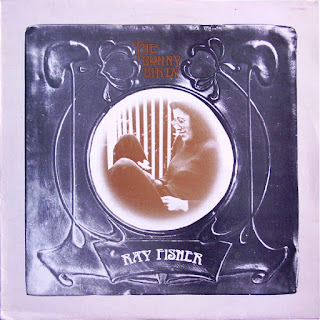 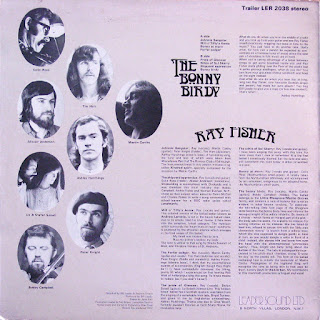 Staying on the theme of androgynous female first names, after Frankie, and Lindsay ,but not staying on the same musical theme, we've got Scotch Folkie lady,and bonny birdie, Miss Ray Fisher.She,who sings with a Scottie from Star Trek style scotch accent(but this one is apparently 'real'?) about Scottish stuff,but without that distasteful Scottish Nationalism that makes everyone groan as soon as North Sea fucking Oil is mentioned! The same shit happens in conversation with persons of Irish decent too.The clock is ticking as to when 'Da Potatoe Famine' is inevitably mentioned. Jeeeezuz, let it go will ya!?
But, when it comes to traditional music, Scottie from Star Trek can sum it up in one of his adapted catchphrases.
"Yae cannie change the laws of Folk Captain!" (Montgomery Scott,chief engineer, USS Enterprise)
No doubt that The Fisher family were staunch nationalists,but no real hint of that crap on this record anyway,especially as most of the English folk glitterati appear on this album,as featured on the rear cover in that folk style of heads floating in bubbles. Included in the floating bubbles are folk gods Martin Carthy and Ashley Hutchings who supply arrangements, guitars and backing voices.
As far as I can see the song selection only hints at the Glencoe massacre when scots killed scots,and no tiresome tunes about slaughtering the English at one of the few battles they actually won.
American Aussie and Jew Hater, Mel Gibson,barked the immortally fictional line "You may take our lives but you won't take our freedom!",in that rather silly film about William Wallace.
They are still a slave state of the English to this day apparently? All that devolved power and democracy, higher capita per head spending of govt funds north of the border,and other atrocities like that. Poor fuckers.
The Uyghur's in China and the Rohingya in Myanmar have got it easy compared to the repressed Scots.
I know that by mentioning the Uyghur genocide in China I am risking receiving a virus that wipes this blog completely and emptys my bank account,but I felt obliged. A western boycott of Chinese goods, like anything by Apple, would go a long way to offer some support for our Muslim chums in the Re-Education centres and forced labour Factories of China.This is probably the only time I have agreed with Iain Duncan Smith ever! Who is normally reprehensible in his obnoxiousness......this also sadly means that I agree with Trump on China too...but perhaps for different reasons.
Oh Yeah.....this albums pretty good by the way.....got rather sidetracked.....again!?
Tracklist:

A1 Johnnie Sangster
A2 Mill O'Tifty's Annie
A3 Bonny At Morn
A4 Forfar Sodger
B1 Pride Of Glencoe
B2 Silkie Of Sul Skerry
B3 Shipyard Apprentice
B4 Bonny Birdy
DOWNLOAD this bonny compressed mp3 file HERE!
Posted by Jonny Zchivago at 11:02

We're starting to collect funds and send extreme feminists to Uyghur country on vacation and see what happens. Chinese army may quickly learn I Maiden's "Run to the hills"

Best I reserve response 'til I'm a bit more sober. In the meantime, thanks for this.

A little disappointing to see your rather simplistic appraisal of Scotland's position within the UK 'family of nations.'
I'm English and have lived in Scotland for over 25 years so perhaps have a better perspective on things than you do.
I can assure you that during the Indy ref every English Unionist political party threw everything they had at Scotland to convince people to stay within the Union.
Lying, manipulation and playing on the fears of the elderly especially were very much the order of the day.
You have to ask yourself, if Scotland is such a blight on the rest of the UK, why were they so desperate to keep it?
I'm sorry but comparisons with the Uyghurs and the Rohingya are ridiculous - and I think you are aware of that - but can you honestly tell me that Johnson's government is one that should inspire confidence in anyone?

What?!! No mention of Scotty (James Doohan) marrying a 17 year-old Star Trek fan when he was 54?

Nick...at least my simplistic view is marginally tongue in cheek, its not as simplistic as craving for Independence for no more reason than dumbass nationalism...especially as they campaigned so enthusiastically to remain in the EU. They've had two indy refs and lost, have one every four years or so and they might get their way,so much for the vote in a generation?Losing the economic powerhouse of London in the bargain...economic suicide. I'm sure Johnson, by his very behaviour secretly wants Scotland to leave the union.
Sick of the moaninga bout nothing basically...Uyghurs and the Rohingya comparison is simply that,puts it into perspective,whether you live there or not.

@parmalee...."its not against the laws of marriage Captain!".....hmm fascinating,or the laws of biology,Said spock, conveniently forgetting that he was the result of a very unlikely coupling of two alien species who by huge odds against parallel evolution, developed compatible reproductive organs!?...Spock being half Vulcan half Biscuit....if you didn't know already?

Whilst I agree that there are many who evince nationalistic tendencies, for many the desire for independence for many is simply a wish not to be shackled to England, and constantly reminded how grateful Scotland should be for being a member of the UK.
The 'others have it worse so shut up' argument simply won't stand up. As Johnson etc make UK politics less accountable and more authoritarian and jingoistic, many in Scotland wish to turn their backs on that and creative something better.
Yes, the referendum in 2014 was supposed to be once in a generation but at the time Scotland was assured that it's place within the EU would be guaranteed if the Union was to be continued. We know what happened after that. Perhaps then it is understandable that many wish to reflect on Scotland's continuing part within this union.

Was it not the inexplicable scottish Tory 'comeback' which helped Cameron win a slender majority in 2015 to enable the idiot to do that other idiotic referendum?.
When i was regularly in scotland ,most scots saw the SNP as tinpot tories....opinions change it seems....now democracy is getting more and more local,down to the majority in your own cul de sac.
"the desire for independence for many is simply a wish not to be shackled to England", well that seems a sensible reason...not?! As 70% of scotish exports go to the neighbour its shackled to geographically,it will always be so economically.Larger countries/regions dominate smaller countrys/regions....nothings gonna change after the possible 2% win in indy ref 3...or 4 etc.

Not to be a Trekky Stickler of any sort, but ol' Scotty there, James Doohan, was a Canadian, much like "Captain Kook" Bill Shatner; his acting abilities first landed him a role in an early CBC-TV sci-fi show called "Space Command" before his big break with ye olde Star Trek.

I really appreciate this blog, Jonny - thanks for your efforts!

yes i was aware....doohans other accents were terrible; especially his english one....made dick van dyke's Bert in mary poppins sound like larry olivier.
but canada should be proud nonetheless.