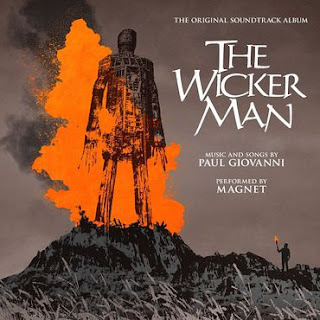 I'm still waiting for Sir Andrew Lloyd Webber to do a west end/broadway version of  one of the greatest movies ever made,namely, "The Wicker Man", the Citizen Kane of Folk Horror Musicals.Or was Orson Wells' career defining moment actually The Wicker Man of  post war Hollywood mystery dramas? Both I think?
What Sir Andrew would do to this classic Dark Folk soundtrack makes one fear for the survival of humanity. What makes this music even more remarkable is that it was written by an American, the late Paul Giovanni,who can be seen in the Green Man pub singing "Gently Johnny" in the outtake sequence and in the finale singing "Summers a Coming In".These all sound like authentic ancient Folk tunes,but,no sir, written by a yank!?
The funniest story about this film is that Rod Stewart threw a wobbler about Britt Eklund getting her jugs out and doing a sensual naked dance to tempt the virgin Fool played by Sergeant Edward Woodward into being deflowered by Brit as the Landlords Daughter.
So much did rock'n'roller Rod moan about this that a body double was used for the dancey bits.....but Wow! What a body double...Phwaoooer!
Also funny, is why on earth is christian society so scared of Paganism? Calling this bizarre film a Horror movie reveals humanity as the death-fearing bunch of simpletons we really are.After-all, Christianity is virtually Paganism but with the green man replaced by a bearded old bloke/entity in the sky.....now that's even sillier than Rod Stewart.

Even more silly than Rod Stewart has to be the absurd 'remake' starring Nicholas Cage. I managed ten minutes of this drivel before I switched channels. I can only imagine Cage brandishing a firearm at the head of one of those Pagan scum demanding "Ok you Pagan Son of a Bitch!This .44 magnum says you know the whereabouts of Rowan Morrison"?
The fuckers also did the same to UK crime thriller "Get Carter",this time even worse, Sly Stallone as Carter!?....Hollywood leave us alone please...in fact leave everyone alone....pretty please!?
What if Richard Curtis did a remake of "Mean Streets" with Hugh Grant as Johnny Boy, or Mike Leigh's version of "Halloween" starring Dame Judie Dench as Mike Myers eh?....I dunno, I'd actually quite like to see these films!
PS...there are so many versions of this soundtrack, so i done a sort of a best of...for yers.
Tracklist:

A splendid film, and why do people in Hollywood think a new version would be a good idea? I can't think of one remake worth watching, but there must be at least one or they wouldn't keep doing it.
Unfortunately My old mac has a problem downloading from Mega - I'm going to have to get a teenager to help me, or a professional expert (that'll cost me).

Ok, i'll put it on Mediafire then!?.....be quick before they flag it...
https://www.mediafire.com/file/emp7girek45qmdo/The+Wicker+Man.rar/file

There is a therapy course that can help...www.britt'sbuttwasreallyhersinthewickerman.com

apparently the body double had a face like the back end of a bus,so.....just take the therapy.

I saw a version that had an extra 1/2 hour at the start, it sort of explained why that investigator was so uptight......i liked it!

Thanks for the Mediafire link, Jonny, much appreciated.

sorry for put defense where must there be none,
but angelo badalamenti soundtrack for the blasfemous remake of this kick ass.
hear it cause it deserves, and stay where you stopped on the movie. you done it right...

Fuck Nicholas Cage, he's one of the prime examples of why Hollywood is the way it is now. And speaking of his face, I always thought he'd be a good candidate for one of your bottle opener designs.

Just saw the original last night and had forgotten how great Christopher Lee's performance was. The one thing I found really disturbing was the poor farm animals that were burned alongside the good constable. And there were no disclaimers in the credits saying no animals were harmed in the making of the movie :(