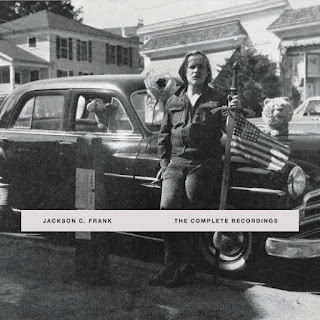 Just as Space Aliens are reluctant to make themselves visible to humankind to avoid starting a new religion,and Just as Eggs Over Easy lit the spark of a new religion in 1972 with the inspiration for Pub Rock....I suppose you had to be there to understand why?.....Jackson C. Frank was an American ignored in his own country but found acceptance in England,where he was rather influential for a lot of the Brit Folkers who had probably never met an American before (except for Paul Simon,who doesn't count),or even met a Space Alien for that matter.One of these being the young, impressionable, Sandy Denny, who drew great inspiration for her own nascent songwriting.....not something many young women did before the latter part of the 1960's.Incredibly she was only 19 when she penned "Who Knows Where The Time Goes",one of thee greatest tunes ever written,by anyone,ever,even by them shy Space Alien chaps.
Jackson himself,resembled,as well as felt like, an Alien.A living tragedy with a life-story of pain and failure that you just couldn't make up.
There was a member of "The Happy Flowers" (Improv Noise Punk duo who sang about freak childhood accidents from the child's perspective) called 'Mr Horribly Charred Infant'.Whether he was named after Jackson C Frank is up for conjecture, but Jackson C was indeed horribly charred as an infant as a survivor of a raging school fire that killed many of his school chums,and girlfriend Marlene,but Frank survived with something like 50% burns.Which would explain his uncanny resemblance to Top British Buffoon Bastard Boris Pfeffel Johnson

Jackson was also minted,thanks to the Hundred grand compensation he was awarded for his injuries.Which is about a cool million dollars in today's currency.So upon receipt of this booty, the 21 year old Frank hoped on a boat bound for England to do the folk circuit with his finely honed Guitar and songwriting skills he had developed during his long,lonely recovery from his horrific burns.
He was an instant hit in the Folk clubs of London in 1965,The Troubadour,Les Cousins, etc.;there weren't too many Americans around, so he and Paul Simon cleaned up. Future doomed starlets Nick Drake and Sandy Denny were both smitten, and it was only natural that Jackson made his first and only album, with Paul Simon producing;Frank was so shy during the recording that he asked to be shielded by screens so that no-one could see him, claiming: 'I can't play. You're looking at me.'...This shyness didn't seem to stop him playing live however,or,have a short romance with Sandy Denny.The romance with Britain's fast rising Folk star was short and tempestuous.Denny's Father was less than impressed by him,or her other boyfriends,especially future bed-hopping hubby Trevor Lucas,and who can blame him?
Sandy wrote a song about Frank called "Next Time Around" that sums up the enigma that never was quite nicely.
Jackson,understandably suffered from what we now call PTSD,so his moods were somewhat changeable. He also spent money as if it was going out of fashion, as they say?....don't they??? He had a new flash car every month,most of which got smashed up due to his soon to be well displayed self-destructive tendencies.
He once told Denny that he couldn't bend down and cut his own toenails because of the scar tissue,so he would allow them to grow long enough so that if he kicked a wall they would snap off.....always the charmer huh?
Soon his visa was due to expire,and he was running out of money fast,and even quicker he was running out of healthy brain cells! So he had to return to the States and total anonymity, for a couple of years,where things went rapidly downhill.
Returning to England in '68,he was by now a bona-fide nutjob,and struggled to find gigs.
Quote from erstwhile Chum Al 'Year Of The Cat' Stewart:
"He [Frank] proceeded to fall apart before our very eyes. His style that everyone loved was melancholy, very tuneful things. He started doing things that were completely impenetrable. They were basically about psychological angst, played at full volume with lots of thrashing. I don't remember a single word of them – it just did not work. There was one review that said he belonged on a psychologist's couch. Then shortly after that, he hightailed it back to Woodstock again, because he wasn't getting any work."
Back in Woodstock, he married an ex-model, had two kids, and when the male heir to his chaos died from Cystic Fibrosis, he descended further into Depression and mental illness.He left for New York in a vane attempt to find Paul Simon,but ended up down and out on the streets for several years. Which included an episode when a kid blinded him in his left eye with a pellet gun.The weight piled on and he began to look like Inspector Clay from Plan Nine From Outer Space...post mortem.
Jackson ended his short harrowing life moving from Mental Institution to funny farm and back....but surely there's a happy ending where being rediscovered he received past royalties, and acknowledgment of his past work and influence?....yeah?.....nope.... Frank died of pneumonia on March 3, 1999, at the age of 56,the stuff of Hollywood biopics....not.....yet Bono still lives?
His sole album from 1965 is a rather haunting work,from someone who knew what pain and the Blues really were in close-up.He could have been Bob Dylan but he weren't no oil painting,horribly scarred,and quite mental...not the main attributes of a pop star I suggest?
He apparently made more recordings,including,remarkably, a Peel Session!?...somehow?....But they make for an interesting document demonstrating the pure futility of trying to get anywhere when you just haven't got the right coloured hair!?
Of these 67 tracks....67???....I advise you stick to the first 10,and single versions there of, which made up his debut and only album.They are quite brilliant,and touching, even without his depressingly tragic life story.The message is 'Why Bother?'
But....at least he got to meet Elvis.....
Tracklist:

Perhaps there was room for only one mentally impeded folker in the U.S., and John Fahey grabbed that ring first. Regardless, thanks for the post and the backstory.

Agreed, other than an abisuve father, Fahey basically spent his time dicking people around. Apparently he enjoyed that sort of thing.