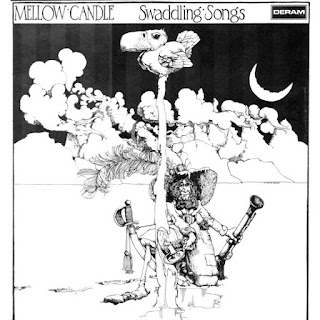 Not all Irish Folk is about pixie dancing,and playing the same tunes with different titles on a penny whistle. Here in France,if you play any Folk Music, even Fairport Convention, the French cannot help themselves from exclaiming with great joy, "Ahhh! La Musique Irelandaise".
It's all Irish music to them,from Steeleye Span,Jethro Tull to A.L.Lloyd and the Watersons. Which is rich coming from a place that has precisely zero traditional music,except for some funny stuff from Brittany,whose very name is a big clue as to where that came from.
Mellow Candle, although not 100% Irish, were Ireland's answer to Sandy Denny's Fairport Convention, and were almost as good as The Pentangle......someone said.
They also had a few under-age teenage girlies doing the vocal duties.....whoops...nearly said oral duities then, for which I apologise profusely. Alison Williams and Clodagh Simonds,provide fair Denny and McShee impressions ,which could have ,in a more just world, won them the accolade of Fourth Best Folk-Rock group in the UK...and Ireland,and beyond.
Clodagh Simonds,was also the chief Songwriter, contributing to most of the tracks on this LP,enabling them to steer clear from that quagmire of Rocked up traditional tunes.
And, of course, Mellow Candle was snuffed out by that equally traditional Rock malady of near zero album sales.Which is a pity for one of the most consistent Progressive Folk albums ever made....100% prog with no terrible Rock'n'Roll,Bob Dylan, or jazz covers that blighted the career of Sandy and Fairport.And even better....No bloody String Sections.....just some Mellotron,a fact which is a recommendation in itself is it not?
Tracklist:

Various French musicians have led me to believe that the Parisians assume they can direct all French culture, and anyone from anywhere else in the country has to put up a serious fuss to get noticed. Alan Stivell did so, and made himself the chief defender and promoter of Breton Keltia. But there are other lingering outposts of older traditions. I once got to see a band from the south of France (but not close enough to the Riviera to attract much tourism) called Lo Jai, who played creaky old handmade instruments including a "string tambourine," which was a big box zither played with chopstick-sized mallets, very enjoyably crude. They also had a small bagpipe that was not well tempered, but made up for it in shrillness.

I knew there'd be some smart arse who knew about french Folk out there....and if I'd had a bet on it would have been Mandolinny. ;-)

I have never cared much for 'astonishingly mellow' in my music but you've got my attention on this. Got to give it a listen. Thanks!

Jonny, I am honored by your faith in me :-) Truth be told, I worked for a couple decades as a rock critic-- even got paid for it, some of the time, and otherwise kept doing it so I could get records for free. My areas of (presumed) expertise, as I implied before, were folk-rock and prog-rock, a conglomeration I can only justify by pointing out that, as as kid, my favorite record out of my parents' collection was Stravinsky's Firebird Suite.

So I soaked up a lot of information on such obscure topics as bagpipes. Turns out the first bagpipers in Scotland were probably Roman legionnaires, and with the empire collapsing into pastoral feudalism, the pipes they left behind flourished. A lonely shepherd doesn't feel so lonely when his instrument plays two or three notes at a time! (I also heard that notion from the Tuvan throat singers.) When Europe rediscovered science, industry, and urbanism, one thing they learned how to do was make instruments (musical and otherwise) to objective performance standards, like tuning, which you can't do properly with a goatskin. So bagpipes receded to the most remote and bucolic parts-- Scotland and Ireland, of course, as well as the fringes of France, Spain, Italy (I have a record of Sicilian players of pipes with two chanters, one in each hand, but by the time the record came out, most of the players were dead) and the Balkans.

Where else can I expound on such matters but in blog comments?

dearest mandolinny....thank you for your ruminations on bagpipes and their beginnings. I did go to an early music festival gig by a bunch of bagpipes made from goats bladders with a few lady singers in a church in ye olde part of town.Rather ethereal indeed....further info is a bit cloudy on that one.....as for Tuvan's, saw a Tuvan Metal group once called Kat something.....would have been better without the metal bit.
You didn't write anything for Melody Maker did you, that was the Folk music paper when i was but a lad.

And, what I think is a fun fact, Clodagh Simonds was the singer on Mike Oldfield's Ommadawn and Hergest Ridge.And the other singer, Alison Williams, went on to become Britain's first female serial killer!
I made up that second part.

Never wrote for Melody Maker! Used to enjoy reading it though. I'm an American, in the Boston area. There used to be a weekly called the Boston Phoenix, distributed free on our numerous college campuses but bursting with adverts, and I wrote record reviews and feature stories for them. (Some of it was rubbish. They had a lot of column inches to fill.) Betimes I got assignments from Crawdaddy, Creem, Rolling Stone (best paying; I wrote eight sentences on a Groundhogs album and they paid me 45 cents a word) and I forget who all else. As I got older and crankier and more wedded to my theories which belonged to me, I started writing longer and more polemical articles for zines that didn't pay. Nowadays I peck at a book, but I no longer seem to have that fire in the belly. It doesn't help that most everything I've heard in the 21st century strikes me as the output of an algorithm.

northfield hat......the first uk female serial killer was none other than Mary Bell (10),.....she's got an album out,as featured on my last radio show..... https://colsemco.bandcamp.com/album/mary-bell-histrion-csc011

Mandolinny.....i got paid 50 quid for writing some eleeve notes once. Usually will do it for vinyl.
I too struggle with 21st century music.....i keep thinking "What's the point?"...even groups i like. But if its just for fun, then i'm there.