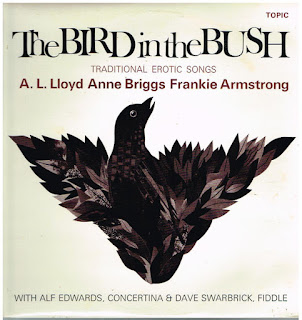 Phwooooaaaar, Fnar Fnar, Kyuk Kyuk,,Titter Titter, them rude Folk Singers Folks eh?
If you've ever wanted a semi-boner caused by a 17th century song full of sexual references as sung by a fusty old bloke called Bert,accompanied by another old duffer called Alf on the squeeze box, then this is the album for you.
Luckily, we also have the lovely,and apparently sober but sexually liberated goer, Anne Briggs , to achieve the same effect rather more easily;depending on your sexual orientation of course.Then again there's also Frankie Armstrong, who, as fate would have it,isn't a beered up old bloke,but turns out to be another fair folk maiden with at least a couple of admirable qualities.
Yes it's true, country folk from the olden days had a sex life,and what's more, they sang about it.Although I guess there weren't many songs about Homosexual love affairs.....but I wouldn't put it past 'em.Seems like the country folk were far ahead of those urban dwellers on most issues at the time.I guess it depends on the person singing,as is the tradition of Folk singing,that you can adapt the words to fit your own personal leanings?So if you were a Gay Shepard,you can adapt any of these tunes to be about that tempestuous affair you had with young Billy Biddlesthwaite round the back of the grain silo in the silage pit (Snigger!). Or, knowing some farmer boys, that troublesome evening in the hay with Susan the transvestite Ram treating him like the lady he wished he were.
We also have a pre-Fairport Dave Swarbrick on the fiddling...Fnar Fnaaar,Kyuk Kyuk!
Tracklist:

I actually have one album from Frankie Armstrong, doing songs from Bertold Brecht together with Dave van Ronk, who, as I understand it had the hippie folks hanging out at his porch every day, much like Philip K. Dick had the same types hanging out at his place... It's pretty good actually....

To carry on the Viz references. I was disgusted by this filthy piece of folking garbage, and put my foot thru my computer when I saw the album cover depicting a very hairy ladies 'lady garden' disguised as a bird in a bush. I'll be sending you the bill Jonny.

Well,Bambi,as a sexually liberated bastard, i believe all pervs as I call them,should be put to the sword,so I commend your rather harsh actions.
I only take bills in euro's and I only pay after being taken to court at the European Court of Human Rights......how does your ladies garden grow?

They should have had a song by jane mirkin on this.

Ok Jonny, fair enough. I'll be having a listen to this album tonight. Hopefully I'm adult enough, and won't be too shocked by it all. However I did blush rather, on your A DARK LIGHT FROM A BLACK SUN collection, the song Gently Johnny, was a bit X rated - I needed a cold shower after that one.

Apparently, 1 in 30 people shit in the shower and stomp it down the drain. I know one you bastards does this.

Also hi Jonny, long time, was in the hospital with Covid, would not reccomend it whatsoever, 0/10.

Hi John John,.....i'm ashamed to be one of the 29.
You're also the first person I have had any communication with that has had Co-Vid. Or did you get the 'rona' deliberately just to garner my attention? I've heard about people like you......don't think that suffering from 'Long Co-vid' will win any favour with me,because i'm not like that...everybody gets ignored here even those with post-viral syndrome.
I've now sterilized my keyboard and switched the computer on and off to make sure that you don't spread your filth in our direction.
I hope you were wearing a mask!?

@ Henk, yeah heard of that,now heard it thanx. That must have been during her sell-out period.Doing some show tunes from the wiemar republic? Appealing to the intellectuals and village idiots alike.

My wife got it, and I was taking care of her, but she ended up hospitalized, as did I, besides a 107 fever for days and scarred lungs im okay, but the scarring is for life, breathing is irritating.