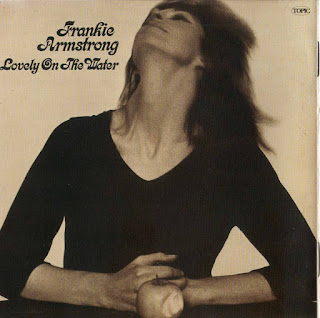 "No no no! Heavens to murgatroyd Frankie, the water' s down there,that's the sky you're looking at!? Sheech!
They're not the sharpest tools in the box thems countryside folk, but when it comes to minimally accompanied singing of the old tunes they can make the most complicated of emotions seem explicable,and pop singers seem like the talentless dicks they undoubtedly are.
Apparently,now blind,which would explain a multitude of things,except that Frankie, isn't a bloke, and she comes from one of those places that no-one can find or escape from,namely, Workington...the clues in the name.A industrial town in the gloriously savage slate grey wilderness of Cumbria,the most radioactive place in England,which sits on the coast next to the most radioactive sea in Europe,The Irish Sea. Cumbria being the home to the first Nuclear Reactor in the western world at Windscale.
So the combination of Coal dust, Steel plant pollution, and radioactivity makes for a heady cocktail that produces the kind of strangeness that manifests itself in English Folk Culture,so Obviously there's gonna be a Folk singer or two that comes from Workington isn't there?
The issues in these songs are as old as the human race.The Brown Girl especially being an early example of Black Lives Matter,or rather Brown Lives matter ,even though the Brown Girl in question does actually survive.
Things never change do they?
"The Young Girl Cut Down In Her Prime" is a two hundred year old version of the recent anti-male protests in the UK.
Tracklist:

A1 Tarry Trousers
A2 The Green Valley
A3 Low Down On The Broom
A4 The Cruel Mother
A5 The Crafty Maid’s Policy
A6 The Maid On The Shore
A7 The Frog And The Mouse
B1 Lovely On The Water
B2 The Brown Girl
B3 The Young Girl Cut Down In Her Prime
B4 The Unquiet Grave
B5 The Saucy Sailor
B6 The Two Sisters
DOWNLOAD lovelier on your computer HERE!
Posted by Jonny Zchivago at 14:05

I see one of the women fronting BLM has millions of dollars worth of property to her name, all in rich white areas. Oppression is payday.

Not surprised Frankie Armstrong is looking elsewhere than the title suggests. In fact she has eyesight issues (what's the politically correct way to say "legally blind" nowadays?). Saw her perform at Club Passim once in the previous century, and she had to be assisted to the stage. She was significantly awesome!

Her resume overlaps two of my areas of interest: I've been a fan of the Fairport Convention school at least since Full House came out, and Armstrong also sang with a political big band that also included Henry Cow and the Mike Westbrook Ensemble (which she recalled "made a lot of noise"), and I'm also big into RIO. I am very happy to see you posting Sandy Denny and Anne Briggs here but, should you get the urge to post more obscure Frith or Greaves or Cooper or Hodgkinson, well, I'll still be here!

mandolinny.....i'm always up for posting anything by ex-public schoolboys as you should know.....may do more RIO but at the moment i only seem to listen to folk and free jazz...howsabout some free folk?

Ok then ,you're alluding to the feminist improvising group ain't cha?...up next.