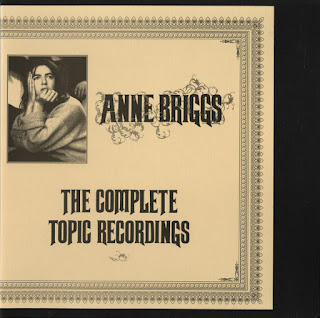 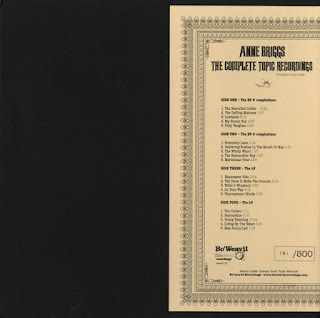 A fine East Midlands lass,with flowing dark hair and an intense stare.....just like your scribe;-).Anne Briggs was only sixteen when she started performing her puritanical solo and unaccompanied Folk singing career at the Nottingham Goose Fair back in 1960. No interest in Johnny Kidd or Cliff and The Shadows for young Anne.When she sings its as if Rock'n'Roll had never happened.....Jazz either for that matter. Instruments???.. that's for sell-outs...the 'please like me' brigade.Or the rogue folkies who formed pop groups, 'The please please like me' brigade, like The Beatles and The Hollies,who were for all intents and purposes electrified Folk groups with a backbeat. Her first EP was out on legendary folk label 'Topic' during the height of Beatlemania in '64,as if from the times before electricity.She sang about the less happy aspects of love and life, unlike our luvable mop-tops.This was about how crap progress was,and the pitfalls of love.Kinda like a sixties version of Straight Edge Punk.
She shunned the spotlight,even refusing to record anything for a while,music was in the moment and shouldn't be repeated.She had no interest in the feminist movement because she WAS feminism.No need for bra burning,she did whatever she wanted without permission from men or women alike.Patronisingly labelled a 'Wild Child' for her attitude to life,especially because she was female,and ladies didn't do things like get drunk and sleep around did they?Er...yes they did.....still do apparently,but now they can play Football or Rugby.....that's progress????
Eventually,of course, the odd bazouki or guitar cropped up,and she even started writing her own songs;but by 1973 she gave up music to live in the scottish wilderness with her Forester hubby, and had a family.Hardly ever to been seen or heard again.One of the very few musicians never to really sell-out to the man,or men.
She was also the source for several of the traditional songs which were popified by The Pentangle and Fairport among others, including "Blackwaterside." Of which former dalliance Bert Jansch's instrumental accompaniment to this song was later copied ,read as 'Ripped Off' by Led Zeppelin's Jimmy 'I ran off with a fourteen year old and nobodies done anything about it' Page; who recorded it as "Black Mountain Side”(notice any similarities there?) and credited himself as the writer....Not the first time Jim was known to do that.....for example probably 'that song', currently in litigation, also? Never forgiven those hairy fuckers for not paying Sandy Denny for her work on Led Zep IV.Twats!
Sandy,influenced by all aspects 'Anne' since she was a 16 year old witnessing a woman on stage in the folk clubs of London,was a good friend,as well as a Fan of Briggs,but could no way match her purist approach to the Folk Lifestyle.As much as she would love to give up the quest for fame or her luxuries,she couldn't.So she wrote a song for Fotheringay about her barrier busting chum, "The Pond and The Stream.
Anne's pure unadorned voice is a beacon for honest simplicity,and intensity,the very opposite to the vocal acrobatics that the modern wave of pop singers torture our ears and minds with today.It was a back to basics approach that would inform the punk music of the future.After all, Punk music ,IS, Folk music innit?

OOOOH! I'm not sure what youv'e taken lately but your posts over the last couple of weks have been the sweetest Easter present I could ever hope for. Not your usual stuff, but for me, it's heavenly.
Thanks so much

Fear yee not Danbis, for there is plenty obscuro folk to follow;down into the deep end we will go. All without the aid of medication.The folk drug of choice be a foaming flagon of ale,of which i am a moderate consumer.
As far as i'm concerned this is the same as my usual posts......its all ethically DIY innit?

Correct, it is ethically DIY my good sir, however it is giving my witches hat and Morris dancing stocking tabs a wake up call, for spring in calling, outdoor consumption of cask's of the good stuff shall have it's vendors, the pesantry shall be allowed to venture far and wide in this Albion land. Long may this smile remain on my face greatly aided by the posts you facilitate.My grateful thanks to you.