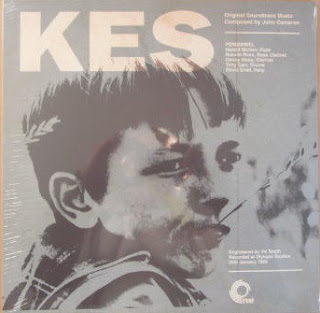 A few of my favourite movies by coincidence have folk inspired soundtracks.One being Ken Loach's film version of Barry Hines' "A Kestral For A Knave", "Kes".
Yes,Kes, the Film, was better than Kes, the book. Mainly because of the casting of Mark E Smith look-a-likey,the then unknown David Bradley as Billy (soon after to regain his unknown status rather swiftly), and the late,great,Brian Glover as sadistic gym teacher Mr Sugden. This film was a silver screen version of my early life, especially the school parts.It was not so much 'Silver' in colour but Grey, like Billy Caspers' clothes.And my version of Mr Sugden was a complete Cunt called Jim Kedie (now dead) who liked to grab your genitals in the rugby scrum,and give you a sound beating for looking at him in the wrong way. On the Facebook site of old boys....yes my grammar school was 'Boys only'!!? I know some people find this fact incredulous?....but on this sad Gateway Old Boys Facebook group,they seem to see this monster as some kind of Hero,...a great bloke? Undoubtedly denying some dark events like a delayed kind of Stockholm syndrome to avoid the trauma that happened long ago.They probably all got shagged by this twat.....as my reaction is normal,I don't think i got shagged by him....but certainly remember rolling with his punches. Anything I say on this rose tinted window into a past that never existed gets deleted faster than you could say Project Yew Tree (the police investigation following the Jimmy Saville affair).....Anyway, that scene on the football pitch was exactly as Kedie was, minus the funny bits.
One of the key themes of the film is the education system of the time, where smart kids were streamed to the Grammar Schools, like me ironically, and the rest dumped in the less academic, Grimmer rather than Grammar, Secondary Modern cesspits. This dour social criticism and bleak portrayal of working class life was typical of Loach's films.The man himself is on record as saying:
"It [the film] should be dedicated to all the lads who had failed their 11-plus (wot your scribe obviously didn't Tee-Hee). There's a colossal waste of people and talent, often through schools where full potential is not brought out.".....I'm living proof that this also happened in the Grammer Schools too?
In a 2013 interview, director Ken Loach said that, upon its release, United Artists organised a screening of the film for some American executives and they said that they could understand Hungarian better than the dialect in the film. Americans couldn't understand proper English back then,unlike today, thanks to the phenomenon of 'Anglo-creep' seeping in UK slang by the backdoor of various popular media formats.Yes, now Americans say stuff like "Cheers","Wanker" and "Twat",enjoy sarcasm, and can watch British films without sub-titles.This is advancement?
I have a disturbing recollection that either this or "The Leather Boys" is Morrisey's favourite movie?....but don't let that put you off, they are both brilliant,although Kes wins out for its poignant soundtrack and emotional pay off.
Tracklist:

Lots of things I'm very familiar with here: 11-Plus, grammar school, rugby (tighthead prop me!)... Of course I know the film but I don't remember the soundtrack so thanks very much for this, Milly's Grandad.

Americans are also enjoying Bangers and Mash now, but not as food.

Yeah nobody in the U.S. says "Cheers" or "innit" except for maybe a handful of teenage Anglophile dorks on the internet. "Twat" has been in circulation since the 19th century.

@unknown..Nobody where you are says Cheers thats for sure.....never met an american in the past who says twat or even knows the word.....same for wanker.
Fuck has been in circulation since before the USA was even thought of,as was the middle finger.
I did hear Hedley Lamaar in Blazing Saddles say Teutonic Twat however,that was an isolated case, now they all do it.

Isn't Bangers and Mash slang for a toilet blocked with toilet paper and turds?

I've heard 'Twat' from time to time but pronounced like 'thought' in the US. I think it's a fantastic insult.

Gotta love the way 'cunt' rolls off the tongue in the UK. It's hard to say it in American English without sounding like a redneck.

I went to redneck grade school in the USA, back in the 70s. Physical Education was the most casually abusive, naturally. The worst I've seen is a "Coach" throwing a kid against a cinder-block wall after the child made a smart remark that contained no obscenities. So not so bad then. When I read the school stories of my father (who went to grade school in the 50s) I realize that I got off easy.

They used to make us do military drills out on the "football" field. "Present Arms" and all of that. One year, the military drills disappeared mysteriously and were replaced with Square Dancing. It's a form of dancing one does to militant music while somebody bellows directions through the whole thing. The dancers must swiftly reproduce these directions as physical motions. Imagine the sounds that were played on an ancient reel-to-reel to provide rhythmic accompaniment. Kind of like a honky tonk Henry Flynt. Or if NEU! had greasy violins.

You tell that to the kids of today, etc.

I hear "cheers" all the time, which I assumed came from the aussies. Thanks for the tips to 2 movies i've never seen.

Trouble is when an american says "Cheers", it sounds far too jolly and positive, it lacks that stoic negativity that Brits have.
...certainly not Aussie in origin......an aussie would make it sound competitive,or blokey.