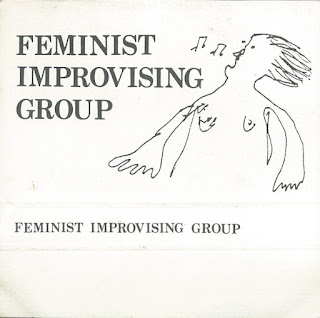 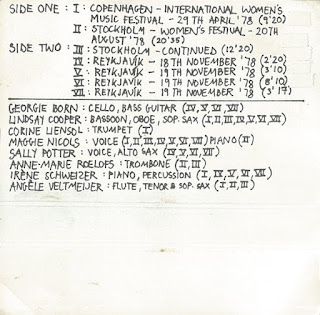 Everybody loves a feminist don't they?
So the challenge is how to alienate as many potential supporters of the cause as possible. This is normally achieved by letting Germain Greer talk uninterrupted for about twenty minutes. Another effective method of closing ears and minds to the feminist cause is by forming a free improvisation group and attaching the word feminist to the collective moniker.
Apparently Cumbrian folk singer Frankie Armstrong was once connected to this ensemble formed by Henry Cow bassoonist Lindsay Cooper,although not long enough to damage her virtually already non-existent career. This stuff could clear a room of Feminists in as long as it takes to burn a couple of peek-a-boo bra's. There will inevitably be a few blokes left to endure the noise, so they can brown nose the ladies with some opposite gender 'support', read that as the opposite genders hidden agenda,as most chaps think this Trojan horse approach will secure entry into the ladies under garments...think again chaps....ok yes it does work sometimes ...statistically.
At least they don't sing lyrics about all men being potential rapists....we already know that, and don't want to be preached at thanks.....we know, and it's to the male sex's credit that so few of them actually rape anyone at all...including other men.Never mentioned is that men are more frequently the victim of male violence than the fairer sex...world war 2 being the zenith of this genocide.Not helped in the previous war by thee so-called Fairer sex doling out white feathers to male pacifists shaming them as cowards.
Is there a Black Lives Matter Improvising group in formation?...if there is they are too late,as most of sixties free jazz beat everyone to it.
DOWNLOAD proof that women can make the same god-awful racket as their male counterparts HERE!...now that's equality?
Posted by Jonny Zchivago at 09:49

Damn, you just triggered a memory :) I'm was around 16, sitting peacefully in a tram in Rotterdam and the whole tram filled up with huge bald women, all dressed in purple, some feminist convention or something, they were way more scary then any skinhead gathering I accidentally found myself in back in the days!!!

I lived together with a pretty hard-core left wing feminist for quite a few years back in Holland, God, the discussions, the fights, her going on and on about sexism in science and me calmly saying that mathematics and syntax don't much care about a male or a female side to things.... Later, years after we broke up, she became a bit of a semi-celebrity writing far right wing articles in news papers, mostly ant-Islam, anti-immigration stuff and then found Jesus and is now with a Calvinist reformed group or something, still teaching history at a University in Holland....

The things we go through....

Figured you'd be getting to this one. Cooper, Maggie Nichols, Irene Schweizer--goddam! Schweizer has long been one of my favorite piano shredders--she's got some great recordings with them Guru Guru cats from way back, and her guest appearance on the final Henry Cow album is awesome. (I know you're a huge fan of that one, Jonny!) Not a whole lotta "shredding" with FIG, but that's ok.

The bits on Lindsay Cooper in that recent Henry Cow volume are pretty heartbreaking actually. Interesting balance with the bits that make me want to beat the crap out of Frith, Cutler and Hodgkinson, actually. With Cutler, nothing new there really--but Hodgkinson and Frith? I really wish I hadn't read parts of that book. In short: the women, and John Greaves (also Geoff Leigh, I suppose), always kinda got the shaft in that act.

So you expect me to believe that it is possible to interrupt Germaine Greer? That's the patriarchy in action right there!

Henk...boy, you're asking for trouble shacking up with a militant feminist. Its funny how their idea of 'feminine' is acting like a male football hooligan...personally i prefer females. They can do much greater damage with psychological abuse than any gang of shaven headed rugby full backs with breasts. Heaven knows i've been on the end of a psychological kicking more than once by a feminine young lady. Patterns of behaviour and modern opinion is such that the male has no other recourse than to lay back and take it,then get a slagging for not talking about it! Men are from earth, and women are from Alpha Centuri as far as I understand it?

Paramlee...i don't think I can handle another rock'n'roll tragedy...i'm getting upset just thinking about it!....see what those feminist ideas have done to me.I'm in touch with the horrorshow that is one's own emotions! I yearn for the days when i was an emotional cripple,and relied on Anger and mental walls...it worked well,until the touchy feely bombardment began in the nineties! I blame ecstacy....like i do for everything.

Badgerstump....i did use the word UN-interrupted did i not?

@parmalee, will you share the bit in the recent Henry Cow volume that seems to have lit your fuse? I dunno, talking with Fred about Lindsay a few years ago, I got the clear impression he held her in very high regard. He gushed praise her work in HC, FIG, etc. and was going on about what an honor it was to have worked with her and for her on her solo records etc.etc. Misogyny is was not.

@Henk, if that story came from anyone else, I'd say they were making it up. Sounds like yer ex is someone worthy of in-depth study. maybe the basis of some grad student's thesis, hell, a research grant!

How many feminists does it take to change a lightbulb?

Two.
One to change the bulb.
The other one to cook my dinner.

Very funny....But changing a lightbulb is Man's work.....the 'real man' punchline is three, one to wash my dirty Y-fronts, another to cook my dinner, and another to beg me for help to change the lightbulb,and if she's lucky I may treat her to thirty seconds of emotionless sex if she's not too ugly.Then go to the pub and tell everyone about it.

Hey, we can have a competition as to who can tell the most offensive joke?

Fuck... The ex.... She was very pretty though, half Dutch, half Indonesian, always being bothered by all sorts of guys, told her to take up martial arts and she started doing jiu jitsu, after a few years she was a brown belt, by that time I was practicing it too :) By that time, if guys were bothering her I would just smile, sit down and relax and watch the show... I remember one time, we're on our bikes and one guy thinks he's funny and steps in front of her, and I swear, she hit him and he did a backward salto without wanting to, laid out, crumpled on the street.... And jealous like a motherfucker, if she only thought a girl was looking at me we had another fight on our hands, lots of drama at many parties, bloody noses, the whole shebang :) Wasn't all bad though, the first few years were pretty great, but when I became a "free man" again, after 7 years.... there's no way to describe that sense of freedom :)

@ rev.b: None of the "triggering" passages specifically related to Lindsay, rather, just generally irritating stuff. With Cutler, well, that one'll take a while. Though he's a surprisingly genial guy for one who comes across as a tad bitter on paper--and working out the logic to what does and does not get the Cutler Stamp of Approval would take a lifetime. With Hodgkinson, part of it was beyond his control--like, he's about as far from working-class as you can get--but there was also some rather surprising obtuseness on his part--like the passage in which he's going on about "the girls," and the author, a bit confused, interjects, "you mean, the women?" Long pause. "Oh, right, the women." (Regardless, I'm eternally grateful to him for first getting me into Messiaen.) Frith was far the lesser offender, it's really just that those three came across as rather tyrannical at times--to the point where, say, Cooper's or Greaves' contributions seemed a bit compromised or diminished.

All the same, I can never bear a grudge towards the Cow for that long--they were my first exposure to non-crap prog, and one of their central theses is invaluable, the one that was pretty much the antithesis of one of Mr Cardew's peculiar theses--namely, that condescending to yobs is both totally unnecessary and, well, condescending. I mean, a friend/acquaintance runs Megaphone records, and he/they definitely support a lot of stuff produced by (and for) yobs (hard not to, if you live in Baltimore). Though I kinda wish Dagmar had opened up a bit more, I feel like she was really holding back.

OK OKAAAAAY!....i'll start....Kid says to mommy..."Mom, I think its Julie's (his sister)Time of the mnonth again"!
Mom: "Oh, why do you say that?
Kid: "Because daddies dick tastes of Blood"!...there you go ,can anyone top that onw?

Sorry drunkenly erased Rev B's comment : Hey, JZ's right, changing light bulbs is MAN'S work, quick and simple. ‘You ladies don’t know nutthin’ ‘bout ‘lectrcity. Now honey, you just sit down and lemme mansplain it to you.’ Near as I can tell, the only reason mah woman cooks for me is that she's hungry and has extra food! @Henk, pretty and dangerous, what’s not to love? I don’t do drama tho’ so I’d have to let that go too.

Thanks a lot for posting this. Been looking for it since the 80s. Just as well sounding as expected.

Offensiveness depends upon the audience, doesn't it? I mean, that "Julie's time of the month" one would probably be totally lost on the royal family, right?

Yeah yeah yeah to all the above. The bigger tragedy is - you're back to Mega again. Ugh.