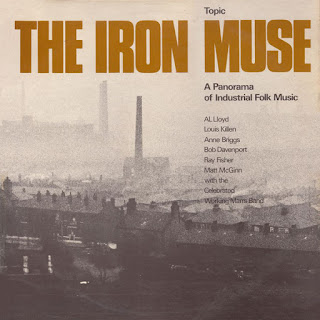 Nooooooo, this isn't an album by Current 93,Coil, or any of the other ,so-called privately educated Industrial folkers .This was made by people who actually worked for a living. And they didn't live anywhere like the tastefully paved avenues and nooks of Hampstead either.They endured the rough end of the Industrial revolution that made the various Polytechnics and Art schools that Throbbing Gristle attended look like fluffy pink kindergartens, and trod the grimy cobbled  slipways to an early death in the ,to quote Pere Ubu, Dub Housing of the Industrial north,where the sun literally never shone. The only way out for these slaves was ,hopefully, a rampant case of emphysema.A disease which Ironically,did for Genesis P.Orridge look alikey, fiddling folk legend Dave Swarbrick in the end,after his double lung transplant......but his was due to chain smoking rather than breathing in coal dust for 40 years.
Ay Lad, life wir aaaaaard oop North,but down the ale houses and pubs.......(amazingly there were no,slash, Zero Wine Bars???.).....of the open cess-pits of northern England,in the absence of TV and Radio,the local singers entertained the cap doffing proletariat with some centuries old Folk songs,passed down purely by ear to mouth. One doubts very much,following the impending extinction events to come,that Aqua's 'Barbie Girl' would achieve the same distinction?.....maybe "The Final Countdown" has a chance, or the Crazy Frog?...But what is sure is that the songs from the English Civil War will still be sung in the crumbling bunkers of the near future.
Often, of an evening,after alighting the pit lift and a quick communal shower, it was down the local, to hear Old Bert sing unaccompanied songs about the Napoleonic Wars,unrequited Love,murder and suicide.....and every body knew the words and their harmony parts.
Thanks to Pete and Peggy Seeger and Ewan MacColl, there was a Folk revival going on on both sides of the Atlantic.Little did those kids listening to Leadbelly and their exotic American Blues heroes know,most of the songs they were singing were in fact Olde Folk tunes from the British Isles,that were just about to be claimed back.
1964 may have been the height of Beatlemania,but it was also the height of the UK Folk Boom when even records like this sold out like hot potatoes.....I say potatoes instead of Chips because the nouveaux Folkies were predominantly middle class and upwards....exceptions being the legendary Martin Carthy,Anne Briggs and the Watersons of course,but there was a fashion element included that some purists would find distasteful, especially head Folk bore and Kirsty's dad, Ewan MacColl.
Before Bob Dylan (BB),and to a greater extent Fairport (BF) this purist approach was all you got in the Folk Clubs,but this was the inspiration for the Folk Rockers of the late sixties.
I apologise for you having to endure several examples of the depressing Geordie accent on this record,but this is the stuff you would have had to listen in the Folk clubs of the north in the late fifties to mid-sixties.An honest excursion into epic story telling inside a couple of minutes.As Martin Carthy says; "It takes a couple of days to read a good book,an hour and a half to watch a decent movie, but a  song can get you to the same place in just five minutes".......unless it's "Barbie Girl" of course.
Another aspect of the 'Folk Revival' was its politicization.Naturally being working class music, it was hi-jacked by a champagne socialist agenda,leading to pink coloured overtly righteous bores like Billy Bragg!
Ironically it took Margaret Thatcher to liberate these people from the Mines and Factories,an act that in centuries to come will be called 'The Great Liberation'.Being very working class myself,and not Tory in the slightest,I took my chance to escape a lifetime of slavery, fueled by the DIY message of Punk Rock and indeed Thatcher herself, to achieve what most of us working class scummers wish to attain....yep....comfortable bourgeois status.The bleating pinko's and punko's were largely Bourgeois themselves,playing politics with the little people where the music came from,which had absolutely nothing to do with Political Dogma,and politics has nothing to do with freedom.
Nowadays the Iron Muse has been replaced by the Plasma widecreen Muse,or ,even more disturbing, the Social Media Muse.Woe betide all the musicologists of the future unearthing the folk music of today.....one assumes they will rebury it instantly,and create a 'Forbidden Zone' like the one in 'Planet Of The Apes'
Tracklist:

DOWNLOAD from the richest seam in the coal mine HERE!
Posted by Jonny Zchivago at 22:52

Some names I know on this one. Been hanging 'round with the wrong crowd obviously. Much appreciated.