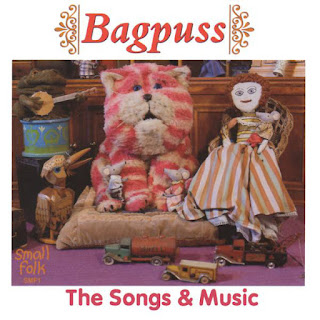 Zchivago sings holding back the tears,for the finishing touches of his version of "Candle In The Wind" in memory of Sandy Denny....."And I'd like to have known you but I was just a kiiiiid"......
Indeed I was once a kid, believe it or not, and as I may have mentioned before, there was a lot of Folk music about, especially on Kids TV programming.The stand out moment being the thirteen,unlucky for some, episodes of the erstwhile adventures of a saggy old pink and white cat in Emily's lost and found objects shop window.Bagpuss!
Emily would found some old crap someone lost in the street, chuck it in the shop-window display, and leave it there for Madeleine the rag doll (Sandra Kerr) and Gabriel the Toad (John Faulkner), with a Chorus of Mice from the mouse organ, and unhelpful comments from smart arse Woodpecker,Professor Yaffle and,of course a certain Saggy Old Cloth Cat.When bagpuss woke up, everyone else came to life for fifteen minutes, and fixed the piece of crap into something that might refind its previous owner.
Oliver Postgate(RIP),possessor of the finest narration voice on the planet,could lull me into a womb-like situation at the drop of a syllable;like leaning back in the bosom of your dear departed mother once again.
Oliver's folky chums, John and Sandra,were commissioned,which in 1970's BBC terms would mean they got a fiver and a sandwich to do it,and make the music.Which consisted of a bunch of traditional folk tunes furnished with new words for us kids,plus a few originals.
I seem to remember the Uncle Feedle Episode featured a few rather horrific rag dolls, that missus Postgate must have kinted up in a hurry,resembling eyeless zombies more than cute children's characters.I'm sure Madeleine sings that she's Just a Rag Doll made from 'Crap' during this epidsode....reigniting the furious debate about "Captain Pugwash" and the characters Seamen Stains and Master Bates......an urban legend unfortunately!
The thing about folk music is that it can be both dark and twee at the same time,and the music for Bagpuss fits those criteria beautifully....forget Current 93 this and similar cult soundtracks are da real thing man.It hasn't quite gained the kudos of Playchool's dark folk princess Toni Arthur and hubby Dave, but it has its darker moments.
Oliver Postage made all these masterpieces on a budget of a tenner per episode in his garden shed....the ultimate TV DIY......and don't forget this is the man who made the Clangers, and Noggin the Nog too ,among many others.
A Posthumous knighthood is called for here...give him Jimmy Savilles,it might revive this soiled institution for future good?

TV needs to make some more of this type of thing. There's
room for everything else. Stoners would love it...

Prof. Yaffle taught me an 18th Century Literature course at Hull University in the mid 1970s.

Agree re: Current 93. I love 'Nature Unveiled', but we all know that it's a Nurse With Wound album and (almost) everything C93 does (i.e. folk music) without Stapleton is crap, IMHO. David Tibet appears to be the ultimate poseur with his emotional spirituality accompanied by constant crying which explains his allure to the like-minded. I was shocked and still am (but really shouldn't be) with C93's popularity while most remain ignorant of the genius of NWW (who will probably be one of the few artists of the last 50 years to be remembered 100 years from now along with CAN, LPD, Residents, Minutemen....). I hate to admit it, but I negatively label the C93 lovers that aren't even aware of NWW. Full disclosure - I do like their cover of BOCs Summer of Love.

XXOO Love you JZ - thanks for doing what you do

Many thanks for sharing this and all the other great music,...it is very much appreciated all the time and effort that goes into your wonderful music blog.....stay safe and healthy my friend....best wishes to you and all your followers around the globe.....Stu