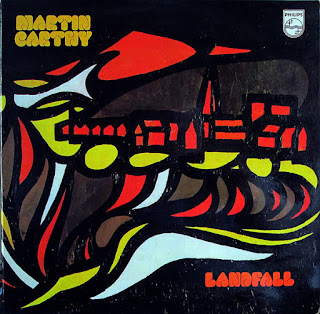 Archie Fisher was not the only MBE on the folk circuit incredibly. For sooth ,Martin Carthy MBE has been a reality for more than a decade.This means I have to choose a favourite Martin Carthy album,so, having a liking for grim tunes and psychsploitative sleeve art I've plumped for this...."Landfall". A word that usually means the moment when a hurricane  hits the shore and calms down a bit.
There's good songs about infanticide,loneliness,death,injustice, and mental illness,what more could you want?
Martin is also worth his MBE for never selling out,and  for his impeccable ethics...you know, those things the Punk Rockers conveniently forgot about once they got in the charts.....I know,'but he accepted an MBE' you say....in the world of Folk this is not the same act of betrayal as Mick Jagger accepting a knighthood, as the royal family was always an accepted part of the folk world especially in the lyrics.Without the murdering, thieving, war mongering scum that made up the royal families of the past, we would have only about half of the folk songs available for the good Martin to re-interpret for us!?
Tracklist:

A1 Here's Adieu To All Judges And Juries
A2 Brown Adam
A3 O'er The Hills
A4 Cruel Mother
A5 Cold Haily Windy Night
B1 His Name Is Andrew
B2 The Bold Poachers
B3 Dust To Dust
B4 The Broomfield Hill
B5 January Man
DOWNLOAD the calming moment of the hurricane HERE!
Posted by Jonny Zchivago at 23:22

I always understood that the Martin and Eliza Carthy are republicans but accepted their MBEs because any resulting publicity would help further the cause of the music they loved... I could also be wrong, of course... anyway, thanks for this, one I don't have, Milly's Grandad.