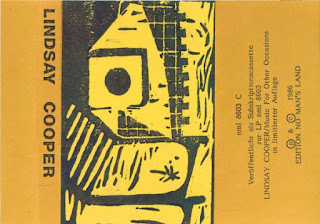 Well when I said that at least there were no feminist lyrics berating men for being men and not women, on The Feminist Improvising Group tape,yeah?...Well it seems that they....I used the word 'They' which in feminist newspeak usually means 'Men'...they,not 'they',saved that one for this tape of soundtracks for zero-budget plays and films that no-one got to see except a few chin stroking artphag's and the people who made them.
"Score" from "Give Us A Smile",sung by improvising vocalist Maggie Nichols,with words by...wait for it....the Leeds Animation Workshop?... has all the paranoia and anti-male propaganda anyone could wish for......yeah of course everything is designed to keep women in their place,y'know, the kitchen and bed etc, blah blah blah.
It's enough to turn anyone into a misogynist inside three minutes.
'No Man's Land' is the label,but I notice Chris Cutler,and Fred Frith featuring prominently on the credits,dunno about you but the last time I checked they were officially 'Male'?
Otherwise, musically great,and reassuringly short.
Tracklist:

Ya know, if you wanted to sum up the spirit of the last several days of posts, you could do worse than Lindsay's first album call Rags. I'll post the mootha fooka right here unless that's coming up soonish....

man the "f" word really can put a sour glaze on anything.....but i do like this sort of thing....