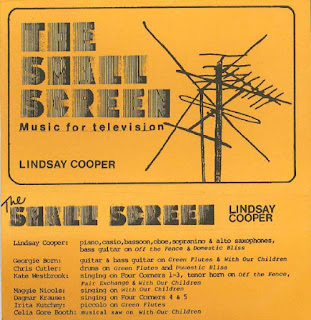 In an age where the television screen is no longer small, but the size of medium sized cinema screen,we are treated to a bunch of channel 4 commissioned films from the first year or so of  Britain's fourth channel.
Back in 1982 I excitedly rushed back from school to catch the start of a brand new channel which promised adventurous and challenging programming. I got home just in time to see the start at 5 o'clock,only to witness the naffest of quiz shows ever invented...'Countdown', the ultimate show for geeks and nerds everywhere!?....the first episode featuring celebrity farmer Ted Moult, who subsequently blew his brains out a few years after his character was stained by appearing on Countdown in the coveted role of Smart Arse.This death by boredom atrocity is still going today,although it has a sexier lady on the vowels, and consonants,the lovely Rachel Riley,and also an x-rated version presented by that potty mouthed tax evader Jimmy Carr.
The real tasty programmes started after the 9pm watershed,with the very wonderful "Five Go Mad In Dorset",featuring a wizard bunch of uncouth 'Alternative' comedian types,playing the roles of Enid "Nazi Sympathiser" Blyton's thoroughly racist,sexist and arrogant little twats, The Famous Five.
Then later still we got the type of experimental films that Lindsay Cooper and her ilk would have made soundtracks for, like the spiffing efforts featured on this rather splendid cassette.
She wasn't too bad for a girl!? Hurrah!
Notes:
Tracks A1 to A5:
Songs from five short films made by Lis Rhodes & Jo Davis (Four Corners for Channel 4).

Tracks A6 to A9:
Green Flutes, a film about a Republican flute band in Glasgow, directed by Nancy Schiesari for Channel 4.

Tracks B1 to B8:
With Our Children, a film about lesbian mothers directed by Melanie Chait (Lusia Films for Channel 4).
Tracklist:

A1 The Song Of The Goose & The Common
A2 Off The Fence
A3 Fair Exchange
A4 Windscale
A5 The Number 8 Bus
A6 Belfast
A7 Fanfare
A8 Flute Tune
A9 Priesthill
A10 End Credits
B1 Court Entry
B2 Lord Wilberforce
B3 Home Movie 1
B4 Open Letters
B5 Linda B.
B6 Home Movie 2
B7 Three Heads
B8 Julia/End Credits

DOWNLOAD via your small screen HERE!
Posted by Jonny Zchivago at 10:40

"Promised adventurous and challenging programming"--I love that. Kinda reminds me of an acquaintance who was a source of nonstop hilarity for all the wrong reasons. He once made a flyer for a show which described it as "A very special evening with..." And he was being totally serious.

Enid "Nazi Sympathiser" Blyton??? For real??? I read so many of her books when I was a kid!

You read what????...maybe that explains a lot!?....well not quite a nazi, but close in terms of subliminal xenophobia and similar stuff...bur at least a conservative.

You have the wrong link to Rachel Riley, here is the correcet one:
https://www.youtube.com/results?search_query=rachel+riley+skirt+flies+up

You are most welcome...

No Rupert,its the correct link....kunt and the gang's Rachel Riley

thanks for these Lindsay Cooper cassettes. Many are on the archival Rarities releases post her death but good to have them as they were initially out in the world.