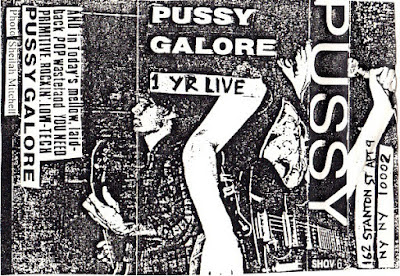 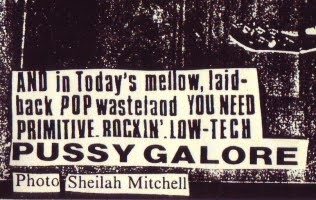 Any album with titles such as "You Look Like a Jew,Die Bitch,Kill Yorself,Just Wanna Die,Cunt Tease and Asshole has to be good right?
Well it is,in all its shit-fi majesty.It's a pity they went in a real studio after this,and a bigger shame that they seem to be Rolling Stones worshipers!?
As an impressionable 20 year old I thought all the kids in America were nihilistic street trash like Pussy Galore seemed to be.....but,no doubt they were art graduates from nice suburban homes,like the CBGB's lot,but the truth isn't something that's at all important in real rock'n'roll is it?
Turned out most American kids looked like the cleanest member of Nirvana when I eventually went there....shocking!
In 1985-7 the USA was the only place you could hear music like this, the rest of the music world had,allegedly, 'moved on'?! And things got worse in 1988 with that Eeediot Dancing on mdma cult that is still with us today!? Don't worry about Vaccines with nano-bots in them,the secret government had us controlled thirty years ago with the "Dance" craze which killed across the board subversion dead in its tracks...but so-what? The fuckers can have it all....doesn't affect me,or you I wager? I'm happy in my miserable bubble......as long as i don't hear any fucking 'Dance' music!......Having said that I could certainly dance ecstatically to "Spin Out" any day of the week.The sound of women shouting to the max always makes me cry too......Hey!Didn't Ultravox mark 2 have an awful single in the charts called "Dancing With Tears In My Eyes" around the same time?....well that was me in a 'Spin Out' moment as described by Midge Ure.....didn't think he was watching me at that Rich Kids gig,but he must have been......"Ghosts of Princes in Towers (thats me with the curvy hips and white jeans at 2:06)" and five pints of cider were the catalysts responsible.....luckily no actual footage exists.

The titles are common language in some quarters here in the states. Charming.

you look like a jew is about ian mckaye...FUN FACT!!!

McKaye.....a fine jewish name if ever there was one.

The stuff of dreams..thank you

PGs lexicon is more like US teenagers of the 1950s