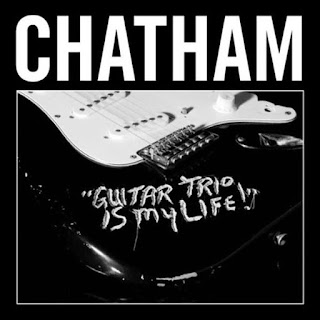 As Branca apparently got his inspiration from C.C.Hennix and other minimalist also-rans,let's find out who he really nicked stuff from;namely  Rhys Chatham.
For New Years Day here's ten rendition's of Chatham's self-defining classic "Guitar Trio", as played on the 30th anniversary tour of the original recording in 2007.
Fusing the one note drones and harmonics of Tony Conrad and, with the minimal one chord rock of Punk,this 'composition'....its called a composition if is its done by a music graduate,....is as if a three second morsel of "Don't Wanna Go Down To The Basement" by that long-haired group from Queens, was looped for an indetermined number of minutes.One of the greatest serious Rock'n'Roll compositions of allllll time.
So, of course it should be played over and over again to further strengthen the concept to a level previously unheard. The Complete Funhouse Sessions by the Stooges did my head in to the point that I may never want to listen to "Funhouse" ever again!;but this I never get tired of.....I've even played a version of it it with my groop (Scouts Of Uzbekistan).If you don't wanna go down into the Guitar Trio Basment then you may as well stop breathing!It's as fundamental as that.......but don't forget "BORIS JOHNSON IS A FUCKING CUNT!"
Tracklist:

Thanks for this one Jonny.