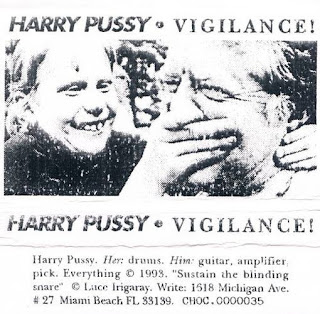 For some people, only clearing a room with your godawful racket just isn't good enough, Harry Pussy, a name so terrible it's inspired, aren't satisified until they've cleared at least a small building,maybe even a modest sized village?
Husband and wife duo of Bill Orcutt (Him) and Adris Hoyos (Her) did to the guitar and drums what sixties free jazzers did to the Saxophone,to make a torturous noise.The guitar screaming for its life and the drums being soundly clubbed to death with no apparent plan.
It's never a good Idea d to be in a band,or even work with, one's spouse.On one hand you end up with something like Wings, or on the other end up hating each other and divorcing,like Moore and Gordon of Middle-Aged Youth.......I'm surprised Thurston Moore doesn't make a guest appearence on this tape,as he always hangs around bands with good write-ups that he ain't in like a bad smell......maybe he did later in the Pussy's career.
Of course 'Him' and 'Her' divorced later,as marriage has the same effect on music and it does on a sex life....it kills the magick and you split up.
This C120 cassette has its eccenticities,which i thought was a tape fault,but apparently not? The sound keeps dropping out,and on some occasions music from another part of the session is inserted momentarily. I'm informed that this was a deliberate act inspired by the Films of Jean Luc Godard????? However, Bill adds: “It was also a useful way to pad out a short recording to fill a 2 hour tape, since we could reuse the snippets.”.....I'm prone to accept the latter explaination personally.The guy from from Chocolate Monk,as quoted in the psuedo-intellectuals bible, Wire magazine, said: "...I guess the recording mechanism was a bit goofed up so a gap keeps appearing".
Its a pity Harry Pussy didn't do a collaboration with Jandek?At least, post split and divorce, Adris could have backed up the ginger one at one of the Corwood Rep's live appearences? Something for the near future I suggest?
Er...no....i'm not gonna mention the attempted coup d'etat in the USA yesterday by what looked remarkably like Jamiroquai with a degenerative brain condition due to their mom's ingesting some dodgy redneck pills during pregnancy.......listen to this instead, its far more coherent and relaxing than a bunch of terminally stupid conspiracy theorists with beards.
Tracklist:

the only band that ever mattered.

Jamiroquai is a cunt, and always has been, not Bill or Adris though, Class acts.

I thought Hoyos was Graham Lambkin's spouse. Although he has now dumped her for Áine O'Dwyer. Sex lives of the avant-garde. I'd rather have a rub down with the Radio Times.

Yes yes, Bill & Adris were together, then not, as was Adris & Graham, then not. Now they behave a lot like Ridder & Emens

how to build a pussy...ever had a sip of that one?

These guys are pretty good

@kevinesse...no not drank from that particular furry cup before...but i did see a review by a member of the 'Public' that spoke to me....
"Stupidest album of all-time. Totally unlistenable and not in a fun way."...now if a review like that doesn't scream LISTEN!!! to you then you are a Q-Anon activist.

@ John John....i concur,That cunt from Jamiroquai is indeed a cunt....comes from a showbiz family,so thats a bad start.....hopefully the cops shoot him by mistake thinking he's that idiot with the cow horn hat in the capitol building.