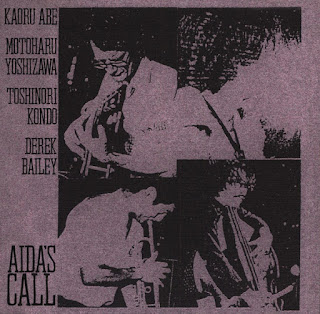 So now we know that Kaoru Abe or Abe Kaoru was a pretentious bore and a wife beater. Here he is in free improvisation with Derek Bailey in 1978 who, and i'm guessing here, was most certainly NOT a wife beater...not even sure he had a wife to beat.Could Google it, but don't you all think that google search has ruined all pub arguments......not that there's any pubs open to NOT argue in!?...If you're reading this ten tears from now, this was written during the pandemic hysteria that you all laugh about in the future.That one when we fucked up the lives of the enormous amount of survivors by destroying the world economy, when all we had to do was wash our hands regularly and stop hugging strangers for six months.
I don't know what I'm complaining about, its what us anti-capitalists wanted wasn't it? The planes are grounded, and now i'm moaning that i can't go anywhere,not that I went anywhere anyway,but its what was necessary to cut carbon emissions wasn't it? I also derided the angry mob of trump supporters who stormed the Capitol,but isn't that what we've been advocating for years.....it was just the Wrong Mob!
I'm just a hypocrite like everyone else,wanting a comfy life and something to help me feel superior to others. Yeah, bring back capitalism and lets party again while Rome burns...i think thats my new philosophy, and Free Improvisation is its perfect soundtrack......but yeah....Kaoru was misogynistic woman battering macho man.Another opportunity for us to separate the man from his art.An art that Keiji Haino said wasn't quite as good as others made out. So we can carry on turning a blind eye to our trumped up morals and take the easy way like we always do.....there are exceptions,and we usually follow their example to the point of naming a shitty park after them,or some forgotten street behind a shopping mall.......and why not? What makes them so special? Martin Luther King delivered his most famous speech,round about the same place that the Wrong Mob stormed the capitol building last week.The Wrong Mob needs a martyr....any volunteers?
Kaoru was dead shortly after this concert,to claim his prize as a free Jazz martyr,and has suitably,from some quarters been awarded the much coveted jazz bores saxophonists's saxophonist choice as having  the most abrasive saxophone sound in Jazz history.The jury's out on that one,but being dead doesn't do any musician or artist any harm in the bullshitty myth stakes.....yeah he's got an abrasive sound,but so has Peter Brötzmann and John Zorn,but they ain't dead.
Tracklist:

well I enjoyed/agreed with all of that! There wouldn't be much literature, visual art, music or athletes to enjoy if judged according to their personalities and private lives. Hopefully people will stop quoting burroughs, bukowski and H. Thompson for inspirational insights before they stop and think about their private lives. Thanks for all the great music. I'm down for watching rome burn while reading burroughs aloud over a blasting copy of woman is the ni**e* of the world, as recorded by notorious cunt, J. lennon

for what it's worth, Brotzmann and Zorn give me the shits. Without getting too far into it, zorn once called Penderecki a "one trick pony" right to my face!

Sounds like a civilized why to spend an afternoon....i'm currently sunbathing buck naked,with a cold belgian beer, on my private terrace reading Burroughs' "Interzone" for the first time in 30 years.A xmas pressie from my parents back in '89.