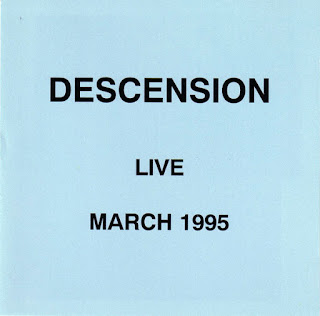 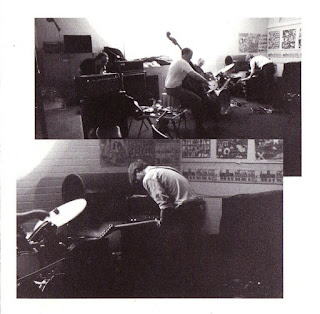 The best thing you ever saw at a Sonic Youth concert apart from the Exit door, was Descension,who were basically  Ascension plus two......double bassist Simon H Fell, and saxophonist Charles Wharf. This is where they began to resemble an AMM tribute act; but an AMM tribute act who got to support Sonic Youth on tour once back in '96. Those indie kids didn't know what hit 'em.This makes Sonic Youth sound more like a slightly out of tune Nirvana rather than the Avant-Garde legends they think they are.
Descension are slightly less pleasing than cousin Ascension is, mainly because it sounds too much like Free Jazz compared to its sax-less family member....but a rather marvellous racket nevertheless.
Tracklist:

"The best thing you ever saw at a Sonic Youth concert apart from the Exit door..." I do love your turn of phrase. Ascension was some of the best spaz I've heard in a good while. If they’re now going to be a cover band, AMM's is probably the best choice there is. Funny thing about added a sax tho'; sometimes it's exactly what's needed, other times it just fucks everything up. Free jazz is best left to the professionals. If this sort of thing really is 'anyone can do it', please 'splain me why it only takes about two seconds to tell the difference between inspired boundary-breaking racket and 'but we added a sax' wanking? Hope that's not the case here, but I'll give a listen. Fuck trump.

I really loved when you called them "middle-aged youth".
That's just... right.