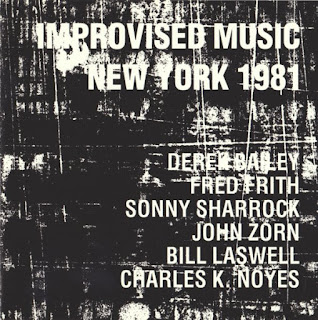 Sonny Sharrock with some downtown Manhattan artsy fartsy buddies from the IN-crowd. Or as the cognitively dissonant Redneck Trump supporting bastards would have it...Satan musick made by a bunch of Democrat supporting  Athiests and a Nigger,with a pair of Intifa Limey's who want to burn down the Whitehouse again,then spread their communism in the stolen state of Georgia...(the place named after George the Third,rather than Donald the Turd,the man who would be King)....and reinstate the Monarchy! USA,USA,USA!
Whenever I say anything,no matter how satirical;they,(white supremacists,NRA members,and bible belt xians etc) can't get satire,or even know what it is!Any satire,sarchasm,or irony ejaculated in the general direction of these poor manipulated oafs, usually gets one a torrent of potty mouthed abuse.So i'm strongly considering No-Platforming the bastards...no matter how stupid they make themselves look....along with the guy who keeps writing 'Penis'in the comments section. I'm sure Sonny Sharrock would agree,at least about the Racist fuckers.......Ok Sonny's Ghost, I'll let the 'Penis Guy' back!
Anyway,as those baseball cap wearing cro-maga-non cavemen only listen to Garth Brooks,who is, ironically, playing at Biden's inauguration today; I doubt they'll fine (sic) their way to a Free-Improvisation post on DieorDIY? They'd fight each other to play this record backwards and reveal the satanic messages hidden in the grooves to justify an attempted assasination of the President elect today.Any bunch of fools who can hear the words "You Lost" as "You Won!" shouldn't have any trouble finding a message to rival the "Turn Me On Deadman" that the twats' Twat himsrlf, Michael Mills, found in the Beatles White Album!?....I'm ashamed to be Human.
But blimey! Three improvising guitarists on one record.....that must be an...er......Record?...Surely?
Recorded Live at 'The Kitchen'.....where else?....in 1981. Even Laswell is suitably subtle.
Altogether now....USA,USA,usa,usa,usa.......suddenly I feel very alone.
Tracklist:

You need to stop listening to this Satan-influenced music and come back to Jesus. Penis.

Hey ignorant prejudiced mother fucker, I love this music and know TRUMP is the best thing to happen in this country, still any of his negatives vastly outweigh Joe Biden's "strengths" ha ha ha ha.....he's braindead and she's a full blown socialist! Edamacate youself buddy. Oh thanks for the music!

Just who in the fuck do you think is listening too this stuff? Joe Biden is a senile crack epidemic victim. And I love this stuff

iF YOU THINK THAT acdick weed likw Trump is the best thing to happen antywhere thet you should changw your taste in wusic because you ain't fucking listening.....what a toital cunday is that twat......this is note a support message for Biden.

sorry i'm drunk,celebrating that a TOTAL CUNT is going to prison...all thase rich fuckers who took yout money are not not celebrating.YOU COMPLETE FUCKING BRAINWASHED TWAT leave my fucking blog and just....well...fuck off!...his hair for fuckssake!

"Atheists and a Nigger" My kinda crowd. Hell, we gotta acoupla limeys and a kike in here too, but maybe we need us a couple more niggers. Here in the US we used to call a crowd like that Americans. Not sure I give a damn what you MAGA-hatted yeahoos think about it. This Sunday, in yer peckawood church singin' hymns, consider that Satan was the fallen angel of music, including them hymns you be singin’. Afterwards, as you scarf down yo’ dinner at yer local Cracker Barrel (gawd I still love that restaurant name!) consider that swill is a sorry-ass recreation based on old southern recipes created by black slaves serving as cooks. Oh sorry, I fergot, you dern peckas don't consider a god-damed thing, ‘cept yer FREE-DUMB. Also fergot to add, 'fuck trump.' Let the trials begin! It'll be the best reality TV ever.

BTW, This IS your blog, innit Jonny? You don't owe a platform to anyone, do you? I recently pissed off some right-wing types on fb who were moaning about conservative looney tunes being banned from social media outlets. ‘They’re trying to silence us!’ In the US, since the repeal of the Fairness Doctrine, no privately owned media company can be compelled to give a forum to anyone, in the same way no newspaper editor can be compelled to print your editorial. Freedom of speech applies to the government, not private concerns. Even with that, the Feds can come after you for speech like advocating the violent overthrow of a duly elected government. We’ll be seeing that dealt with over the next several months. I’ve been enjoying some serious daily schadenfreude orgasms over every new report featuring ‘before’ photos of the gullible proudly invading the Capitol, only to be followed by the ‘after’ mugshots taken at their arrests and arraignments on federal charges. ‘ ‘elp’elp, I’m being oppressed!’ What’s really been so charming is most of them broadcast their crimes live while in progress, on devices loaded with their personal information, names, addresses, locations, etc. The FBI’s been busy, but I imagine the works been relatively easy. As with tr*mp, we’re lucky our ‘revolutionaries’ were so god-damed lazy, unorganized and feckless. Unless he did it secretly, tr*mp forgot to pardon them on his way out the door, but that was to be expected. No? Aw..bless your heart. We’ll all be pray for you while you’re serving time. So feel free to block and censor at your pleasure. That said, they do make good targets for verbal abuse after heavy imbibing. I’d also like to figure out just what anon penis is after. Is he looking for a penis? Is he inordinately proud of his penis? Is he lonely for new penis? Perhaps he’s simply a five year old with a new word? If that’s the case, I have some boner jokes he’ll just love! I presume it’s a he. Most women have better thing to obsess over. Over to you… Penis

Hi Jonny
Your arguments and put downs are much better and effective when you're not drunk (sorry). I'm not even sure if Otis T's comment might be 'ironic'? Anyway hope you're not suffering with a hangover after celebrating the end of 'the loser' Trump - I just hope he fucks off and shuts up, or better still gets back to The Apprentice that I will never have to watch.

@Bambi....indeed i do have a hangover,got through a bottle of processco and four cans of leffe...not a recommended mixture....agree with the low quality put downs...i hope he WAS being Ironic.....if not he deserves all the drunken abuse that can be mustered.

Joe & Drumpf are both Pedophiles, can't wait for Putin to take over. Oh yes, and Penis.

Jonny, I love Leffe (just about my favorite lager beer), but normally stick to ales. I learned my lesson about mixing beer with wine years ago. 2x 660ml bottles of Leffe brune, does the job for me these days, or blond if the brune has sold out. And Leffe looks posh and serfisticated just like wot I am.

Bra, this is Sonny Sharrock in heaven. Just talk about my music, man... Don't sully it all up with the T-man and shit. If you fight in the mud with a pig, you both get dirty. And the pig likes it!
Hey, get this: Linda had a stroke in 2009, and her singing...you couldn't even tell. Paul's Linda is up here and, well, Paul knew how to pick some sweet vegan you-know-what.
Peace

funny how Frith is playing his songs instead of improvising.

Awww. Li'l drunk, no-nothing "a(u/r)tistic" cunt nobodys arguing politics on the comments section of a blog. Y'all are so damn cute.