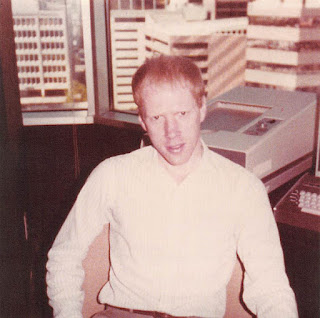 Hey guess what arrived in my letterbox?
Its one of the latest from Corwood,with a "Myth of the Blue Turtles" out-take photo on the cover.Is that Houston in the background?
As we're in a bit of a Free Improvisation kick at the moment,who better to join the party that Mr Outsider Improv himself,The Corwood Representative.
The thing about Free Improvisation is that you can bang out an album in an evening,every evening,if you want to. I imagine Jandek has a few thousand unreleased albums in the vault that will be released non-sequentially,immediately,and a long time after his death...which will not be annouced,so he can assume a form of immortality;rather like the guy who was Muslimgauze,who still releases albums long after he went to claim his 72 virgins.
I like this concept.
Like Voyager 1 and 2 ,he will continue to travel through the intergalactic void of musical infinity until some alien species discovers him and he's hailed as the Mozart of that particular planet.
Saying that, however, if this particular disc were sellotaped to the outside of any future intergalactic probe,beware who finds it. If they were anything like Earth Humanoids they'd send an invasion force immediately upon hearing any of the bleak tracks engraved within.But as this race may be technologically superior,they wouldn't be able to play it,because CD's are likely to be long obsolete,and they only have teak effect record players as required by their advanced consumer laws.So we'd be safe anyway.Although taking into account the vast distances involved the Earth would have been long consumed by our local dying Star.So,as there appears to be no Planet B within several thousand light years from Earth ,the Human race will be doomed.
Don't worry,this will take place a billion Earth years after we have destroyed ourselves, and turned the Earth into a lifeless rock,so lets bring back those handy CFC's instead of pissing into the wind with Green Energy initiatives that are too little too goddam late.
At least we have Jandek to enjoy as the ship's going down and the firing squad takes aim at our minds? Traditon has it that one member of the firing squad randomly gets a dummy bullet,so the whole squad isn't sure if they were the innocent party.Which is rather like the avid recycler on the street who recycles to assuage their guilt but drive everywhere and go on foreign holidays twice a year. Despite their wholly inadequate contribution to the planets future well-being,they feel no responsibility because they have put some bottles in the bottle bank.They're just the guy with the dummy bullet.
So,don't expect the two minutes standing ovation that Jandek gets at the end of this concert the next time you refill your recyclable water bottle.You're not trying hard enough.
Tracklist:

Thx a lot (discovered via your blog few month ago).
Cheers

Thank you for sharing the files.
But I can't find track 2-5 "Be There".
Could you please re-upload it if possible?

Oh Fuck! it took half an hour to upload that fooker! I'll reup it later tonight!

thank you Jonny! hopefully you will be posting Aarhus Sunday soon

Who the hell took all the solitary pictures of the guy? Mother Smith? The portrait photos have always been as important to his, er, oeuvre, as the sounds to me.

Thanks for the post Jonny and for taking the time to do the re-up.

Its either his mum or ,from what I've heard, his pre-pubescent lover....this one,ironically,looks like the end scene from Paris Texas,which bears some similarity to what i just alleged.But i still dig Gary Glitter, so whats good for Gary...etc

Gary is clearly innocent, as his pals Rolf and Jim <3

I'm surprised that nobody has ever shared even an attempt at correspondence with Corwood asking more about the photos and who takes certain ones and why - Not to my knowledge anyway. I always thought the covers were a really unique and special aspect of the project. I have a feeling he would just ignore the question though...

Why are you giving his copyeighted material away. WTF is wrong with you. If you had decency, you would put up a link for purchase.