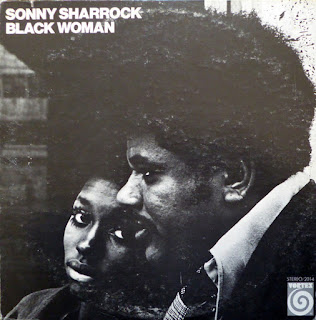 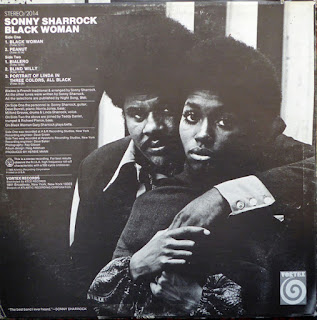 A rare breed in the sixties was the "Free Jazz Guitarist".Apart from Sharrock, Bailey, and maybe Keith Rowe, one would be struggling to name any. Nevertheless, Sonny boy was there more or less at the beginning as one of the bright sparks who thought that they could do an Ornette Coleman on the six strings that drew blood. If your fingers don't start bleeding upon hearing this ,like jazz stigmata,then the sound of his wailing missus will do the same to your delicates ,such as ears,wedding tackle and central nervous system. So beware yee uinitiated and start off with Django Rienhart before venturing further.
Not blessed with the same smouldering good looks as Derek Bailey, Sonny was evidently so delighted that he could pull a half-decent bird like Linda,that he put her in the band (normally a disastrous Idea). Husbands usually do this to keep an eye on the wife or girlfriend while they're on tour. Although, in the case of Paul McCartney, I can't believe that his Linda would have been shagging around behind his back somehow,but the demure ones usually turn out to be the most randy,so good oblique thinking there Paul,but not so great on the lack of any musical ability front;can't win 'em all I suppose?
Now, Sonny's Linda fancied herself as a wacky Free Jazz Vocalist,which ,along with standard Jazz Guitar,are the two most horrible sounds known to man; apart from the sound,and i'm probably risking my life by saying this, of Donald Trump having sex one may suggest somewhat warily?
You know that wailing bit in "Dark Side Of The Moon" ......yeah?......well she does that all the way through the album to the point where you just wanna scream SHUT THE FUCK UP!!!!
Luckily, the smoulderingly good looking Sonny makes up for this with some inventive guitar abuse which distracts somewhat from reverb drenched Linda's vocal machinations.......ooooya buggar!
There are plenty of pictures of Sonny with a controlling arm around his wife,and putting her in the group gave him feelings of security which were in vain as she left him a few years later......Women huh?
Of course you know Sonny Sharrock was in Last Exit,so one can forgive him his human weaknesses;but he does wear his guitar far too high,like that slap bass fool in Level 42....a trait I cannot abide,no matter how easier it makes chord formation.......who needs chords anyway? Unless its a nice comfy corduroy jacket and matching pantalons.I was once the proud owner of a beige corduroy Levi's Safari suit in the nineties(with a handy boot flare).Very popular at disco's.That's the only chord I know of ,except the cord you plug into the amplifier of course.
Tracklist:

You're right....i have an album by new Direction Unit...its got him on it. And also there's that Gound Zero bloke later.

I like Mr Sharrock but I found this album something of a challenge. I may listen to it again, but I think there of more chance of me shitting in my hands and clapping them together.

The sad thing about Margaret Thatcher being dead is she only dies once.

Yeah Bonswa, why would we want to allow a woman who saved,at least me, from working in a factory or the Mines, to only die once is beyond you....although what that's got to do with Sonny Sharrock I dunno?

Super big fan of this record and appreciate you uploading(since my laptop died,along with all the music I had there) Its not on YT anymore, but a really nice video of him performing in 1970 use to be there.

Thank you!! Have it on vinyl but "I can't play records at work"