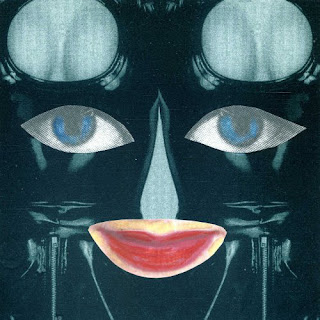 Described as 'Almost Mythical', by the  record bores episodic bible, "Rec-bored Collector" magazine ;the 'almost',which implies 'Not', 'Mythical', Philip Johnson's first vinyl album since "Youth In Mourning" in 1982,is the jolly bizarre"Year Of The Black Fridge". Some of the 220 limited edition copies have the 'controversial' album sleeve art, of two female Nazi camp gaurds,caught in a candid action pose,pesumably from a hidden camera?One of them dedecked in sexy jack boots showing a bit of leg below her regulation SS knee length skirt. The female Nazi is a popular turn at your averge S&M swingers party......so I'm told. The harsh reality was, i'm sorry to disappoint you all, but the ladies in the  SS were by in large, a bunch of angry Munters who hated the world because they were ugly fuckers. Severely beating an attractive Jewess to death was a surefire way of making them feel good about themselves,and still be able to look in a mirror,a feat most women would do anything to achieve.Psychopaths are also narcassists,now matter how hideous they are on the inside or outside,or what sex they are.
Naturally there will be a legion of loners with boners tugging themselves off at the mere prospect of being whipped by a female Deathcamp guard,but to be historically correct, their uniforms were made from a very coarse cheap fabric,and NOT Pvc. Hardly a myth shattering truth for most, but there's always someone, somewhere believing something absurd.
The other rear cover depicts the less 'controversial' image of a young lady with a short skirt and a pair of wellington boot;presumably this is a reference to the heroine of his fetish filled novel "Jeanette" (by his pen name, Joe Simpson Walker),the lead character of who liked to wear wellies, rather than Jackboots, when indulging her dark sexual side of an evening.
This theme does crop up from time to time in Philips work,and "Year Of The Black Fridge" is no exception.

DOWNLOAD and defrost HERE!
Posted by Jonny Zchivago at 15:38

I bet it was a lot of fun to make this. But why would anybody listen to it?? I did because it's on *your* blog, but I think it's utterly boring.

Awww don't be like that Wolfgang! I think its good...in fact i played this at my xmas dinner party to massive complaints...thats a good thing isn't it?

The two sides of this record are quite different. Is one more boring or complaint-provoking than the other?

From what i recall, i only played side two of the album at xmas,so that was the one that got the complaints, although I'm sure side one would have got more, because of its lengthy voyage into repetitive monotony....everything I like in a record....i wouldn't use the word Boring myself,but i like anything that gets a reaction...no reaction = boredom in my book.

I would have thought "Congratulations" could make a party record - you can do line dancing to it. Just turn it up so loud it makes the floor vibrate....?

By the way, the controversial back cover is taken from the Slackhurst Broadcasting video "Nazi Boot Girls", which can be seen here:

Nice video.The one with the bobby socks and proper ladies shoes is my favourite.In another time and space we could have ran away to sea together.
The others remind me of the East German beach volleyball team from the Jerusalem Olympics in 1984 and a half-ish.

Yes, that video is kind of interesting. The music is very suitable. About that girl: She seems to be the best one. But not because of her socks or shoes, but because she avoids her face being filmed, so at least she seems to be embarrassed.

Referring to that comment of yours above: Ok, Jonny, because it's you I will try not to be like that. And your use for xmas is indeed proof enough this is a great record.

I must confess the comment was meant for the previous album, mixed that up. This one is indeed a lot better, or maybe I'm just in a more receptive mood today!

I once saw a fetish magazine, the old-fashioned kind where most of the pictures were taken in people’s front rooms. There were pictures of a woman in what was clearly a home-made Nazi uniform, but someone had whited out the swastika on her armband. So some standards prevailed!

@PJ that sounds like a potential album cover.If only we could find the image.
I once mentioned to a girlfriend that my favourite image was the swastika flag,and that few images hold such eomtinal powrer...she then proceeded to make me one,which wa presented to me for my birthday.It was kinds like one of those upsid down moments when your auntie bought you the wrong t-shirt....ah bless her, her eyes full of expectation....after the initial what the fuck have you done moment, i said oh wow thanks...then she said aren't you going to put it up (on the wall)?...which i did......only later for it to be seen by my nephews jewish friend,as he was sharing my house at the time.....i didn''t even try to explain myself....oh think what the fuck you want....keys!

No suppose about it the Joy Division (well they were still Warsaw at the time)Live at MIDDLESBROUGH (please get it right) Rock Garden. The tape was from the mixing desk and was given to Peter Hook by the owner (sorry but i can't think of his name)of the Rock Garden, the tape was then stolen many years later from Peter Hook's house and surfaced on the net. By the way Joy Division were great that night!!!
Take Care stay safe
Reb