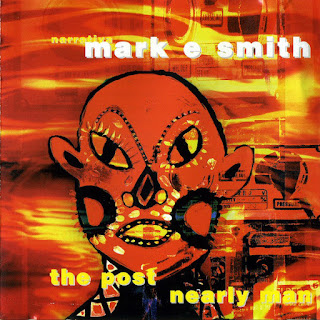 Staying in Manchester on the theme of mancunian Poetry....cut to pseudo intellectual skin'ed blogger from near future to explain......
If the kids of the future are still able to read,write and go to school, the works of Mark E. Smith should clearly be on the syllabus. A unique wordsmith was Mark Edward,criminally underepresented in the exclusive spheres of the spoken and written word.
Around the time that seemed to be the end of the Fall around 1998,with the infamous drunken brawl in New York,when the long serving/suffering members of the classic Fall line up walked out on a seriously alcoholic,and abusive Smith. Mark Edward 'S',recruited a new band and created his first solo album,"The Post Nearly Man"; which was a kind of an experimental spoken word collage,primarily featuring Mark's unique style of language and some unaccompanied readings of Fall lyrics.
"Get ahead with your purile slurred word rigmarole and 'purritout('put it out' in English)'", says Mark on "I'm Bobby(part 1)"......And 'Purritout' he did.
"The Post Nearly Man",ironically starts off not with the words of Mark E. himself, but those of fellow initials user, H.P.Lovecraft,and this unnervingly accurate insight into the oncoming New Dark age:

“The most merciful thing in the world, I think, is the inability of the human mind to correlate all its contents. We live on a placid island of ignorance in the midst of black seas of infinity, and it was not meant that we should voyage far. The sciences, each straining in its own direction, have hitherto harmed us little; but some day the piecing together of dissociated knowledge will open up such terrifying vistas of reality, and of our frightful position therein, that we shall either go mad from the revelation or flee from the light into the peace and safety of a new dark age.”

.....well,I couldn't have put it more bleakly,or accurately myself? Let there be No Light!

After the Lovecraft quote,this CD is a fine work that examines the joy of language,and delivery of therein, which almost becomes an avant-garde tape collage.....(oooooh He'd have hated that pigeon hole!).Frequently used,is that technique that fellow poet,and obvious influence,Don Van Vliet, used on Trout Mask Replica,stopping and starting a cassette recorder or dictophone,to live edit ones parole in real time.
But unlike most 'proper' artists and poets, our Mark, wouldn't waste his and our time explaining himself, its just something he did,and here's the product and the proof.
Question:....Poet, or just drunk bloke doing drunk bloke stuff that we all read too much into, viewed from our pretentious disneylands...ahhhhh!
Personally,in the last ten years or so of the Fall it did sound just like that.A middle of the road post-punk tribute band fronted by a Drunk pub philosopher.......but,indeed,a much missed, Drunk Pub Philosopher......irreplaceable.
From here in The safety of this 'New Intellectual Skin'ed Morass'....RIP MES.
(read my honest obituary of the great man/drunk HERE!)

This is definitely one of the greatest things he ever did. It really ought to end with Dissolute Singer - but that sort of perversity was MES all over.

Parts of this were recorded at PWL studios (!!!)

Yeah some pioneering cow bell programming took place in that studio.I mean...."Especially For You" was recorded there......Mark must have been humbled?

Well.... If I had to make a very short list of bands that influenced me the most D.A.F. would be on that list for sure, I was 15 when I bought Die Kleine und Die Bosen, 40 years ago, and I still listen to it often (Same goes for Hansten Klork from Metabolist)....

For you....Hmmmm.... It would open up a nice trail of posts wouldn't it? Their first albums were all produced by Conny Plank who at one point I read, turned down David Bowie and turned down Bono, didn't wanted to work with either of them as he didn't find them very interesting.... That fact alone.... well....

I just can't seem to Plug Myself In
PLUG ME IN

@ hENK,yeah i think was 15 or 16 too,but never got Metabolist until i was about 18....i've done all my DAF posts, so will have to find a bootleg or something...maybe one of those virgin albums,haven't posted them?
Yeah, its never good when some minor celebrity that you grew up with dies.It reminds one of ones own mortality and the rapid passage of time....FUCK!...its us next innit?

I was going through your D.A.F. posts today :) And posted a link to your blog on my blog too...

Kenny Rogers just died too, never a big fan of Kenny's but I do love his Kenny's Chicken restaurants, to bad they closed down the one here in Bandung last year....

Don't mind the slightly cheesy hard gay disco way tunes, in fact, when in the right mood I love 'em!

Makes me think of the whole "he/she was a hero of mine"... I don't really have any musical "heroes", don't really like the term coming to think of it.... People I admire, yes, sure, like Gugum Gumbira, the guy who basically invented the whole jaipong genre and who became a good friend of mine in the last few years, he sadly passed away a few months ago, when I heard it, at two o'clock at night I immediately went to his house, watched him being washed and prepared for burial. As the hours dragged on the place filled up with hundreds of people, loads of local celebrities etc. and we went with two huge buses to a place called Majalaya where he was from to bury him.... I hope good old Gabi gets a farewell as grand as that one was....

The Plastic People Of The Universe with Egon Bondy come to mind, for what they went though making their music way back....

Robert Fisk! If there's one guy I've been admiring in the last few years it would have to be good old Fisky, I keep telling people to read his The Great War For Civilization, few do, but the ones that do are just as blown away as I was when reading that one...