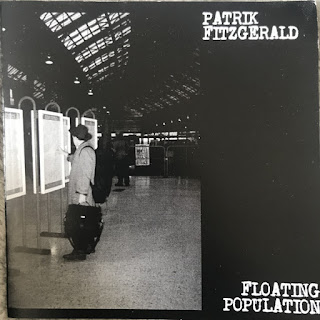 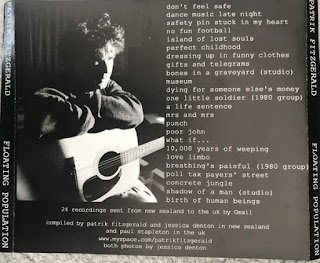 He may have suvived the New Zealand earthquake of 2011 (thats where he lives by the way),but he didn't survive the Punk Rock earthquake of 1977....or at least I thought he didn't.I had all his Small Wonder works and his 'sell-out' album for Polydor (get it HERE!),but he seemed to disappear down one of the cracks in the post-punk nuclear winter. It never occurred to me that he may have just...carried on regardless?In the late nineties someone in the pub said to me, "Hey remember Patrik Fizgerald?".....fuck yeah! I had completely forgot about "the Punk Poet".I staggered to the Record and Tape Exchange shop in Camden,and found a compilation of Pat's post punk releases called "Tresures from the Wax Museum", and christ, was it good,better than I remember.So,as usual,this sparked an autistic kind of obsession to find more.
Luckily,he was 'Big' in Norway,so it was possible to get some of his more recent releases,and he sounded exactly the same as back in the day,like he'd been defrosted from a cryogenic chamber dated 1977,voice and slight lisp still very much intact.
This CD was released in 2006 as a souvenir to Patrik's UK and Norway tour. The songs are a mixture of unreleased material and re-recordings of older songs.Its Great basically.
All the old themes are there, alienation, lonliness, the pointlessness of existance,the casual drift into alcoholism and violence.I can't think of many other artists who can articulate this cruel drabness quite as appealingly.Just hide those razor blades.

DOWNLOAD the sound of a population hitting an iceberg HERE!
Posted by Jonny Zchivago at 11:10

Wow, can't wait to listen! Thank you, you made an old man very happy!

I had the opportunity to see Patrik live in Berlin around 1983, I think. It was a small club of course, can't remember much else, though :(

About that "Treasures…" compilation: I was very disappointed about it, because most of the stuff was re-recorded. After having listened to the originals (from tape) for hundreds, if not thousands of times I could tell exactly.

Do you happen to own this single?

I would like to hear both songs, Anne Clark (whom I don't like too much) with music by Patrik Fitzgerald. Same as with the "party mix" of "Short Story" on A. C.'s first mini album. Great because of Patrik playing keyboards!

In case you don't know here is a lovely demo or rehearsal version of "Tonight" with Colin Peacock on the Wasp synthesizer:

Hi,
i think you're mixed up with the 'Best of' compilation on anagram,where most of it was re-recorded...which i actually liked,as more stripped down versions of the tracks from Grubby Stories..'Wax Museum was a compilation of his post 1982 work.
Not got the flexi i'm sorry to say....but i do have his 'dems' for small wonder. I'll be posting everything I have, because,like you, i'm a fan...and i don't say that about everybody as you know.

Ah yes, could have mixed them up ... And you are right about the Grubby Stories tracks of which several are spoilt from the band or the producer or whoever is to blame.

Yeah, The Grubby Stories album had to ROCK a bit for the public to wanna buy it...it wasn't very fashionable to be minimal in 1978/9...it didn't sell of course,and Polydor dumped him.

It's all too sad und unjust. Of course (and thankfully) this is not music for everyone but at least his outstanding talent should have earned him a decent living and much more recognition.

I did own a badge which had the slogan "Famous When Dead!" on it...as he seemed to like button badges back in the day, maybe i should send it to him?

I think he has enough humour, but it would not exactly be uplifting ...

About the fame: At least there is a double tribute album

Don't want to hear it but at least it will have brought him enough royalties for a nice holiday, I hope.