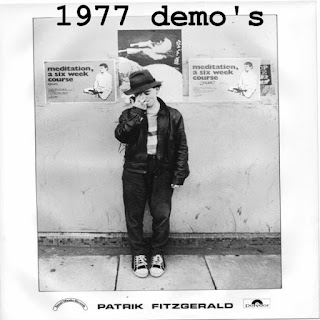 These are the songs that got Patrik his deal with Small Wonder records. The boss was so impressed that four of them were included on his 'Paranoid Ward' mini-album.(you may have noticed that I used the opening track of side 2 with the radio four snippet here?).
This is the birth of DIY punk,recorded on a cassette in the squat that Patrik lived in while he tried to get his pop career going. Trouble is that he was so poor he couldn' afford an electric guitar and amp to get in one of those new fangled 'Punk' bands, unlike The Pistols with their top notch equipment that was, alledgedly stolen from David Bowie by Steve Jones. The evidence is quite tenuous for that story,but it explained away how they had thousands of pounds worth of frontline musical equipment. Its alright shouting about having no future and stuff, but there aren't many teenagers with a white Gibson Les Paul like the one Mick Ronson had,and still had on the night that Jones and Cook were supposed to have stolen everything backstage at the Hammersmith Odeon...there's video evidence provided by D.A. Pennebaker.
Patrik never had a manager who could buy him a Gibson,fender amp,and lots of designer clothes.He did audition for the Mick Jones' London SS proto-punk band,but he wasn't 'cool' enough. Hair too short probably,and didn't have a cool axe.
Poverty did provide Fitzgerald with a unique angle in the Punk Explosion,as the only act with an acoustic guitar. This led frequently to Patrik having to dodge the odd missile as he plied his trade across the gob-soaked stages in the Punk wars of the UK in 1977. Including an unpleasant reception at the Rock Against Racism concert at Victoria Park London in 1978, while the 100,000 strong crowd waited for The Clash to play.

Patrik was a fine wee man but PLEASE PLEASE tell me you've the common decency not to go in a Billy Bragg direction next.

Billy Bragg???...sorry can't place the name.
But i do have the sheer nerve and total disregard for health and safety to go in a Shug Hanlan direction!!?

"Shug Hanlan Direction", weren't they the dance troupe on The Lulu show?

Thanks for the Patrick..

Did someone mention the Pangolin?...donate to my pangolin fundraiser for my fucking birthday....now i'm upset!!!!

ps its on face fucking book!!!!

I only just realized that this is the dude from the Artists for Animals--Abuse record. Nice!

What's wrong with Billy Bragg? Is this hate from drummers and bass players because he tried to make you obsolete or because he is a commie pinko socialist living under the benefits of a democratic society? Wither way you are jerks and really Billy was just doing what all musicians do by writing his songs... trying to get laid! Be nice to Billy still.

Love Patty herein too thanks! ☻

Nihil my son.....its his voice, and his self righteous pinko lyrics.I also didn't like his guitar,or the fact the he hung around with the Newtown Neurotics........i dunno what i'm talking about because I've never heard of anyone called Billy, or Bragg either. As a supporter of Dole NOT Coal in the 1984 miners strike, in theory, we wouldn't get on.....but i dunno who he is ,so that is purely hypothetical twat-dom on my part.

PF is the only artist that would put hearts and xoxo's on his (inner) sleeves when he sent me records. Greece is the only country in the world where I can find Rudimentary Peni vinyl. The G F Fitzgerald album (was it called Mouseproof?) is great too but you knew this. You know everything.

G F Fitzgerald appears on this blog on That Guitar Solo's 2 album with Frith,Bailey etc.....but i ain't heard the album....i will correct this glaring omission....does the G.F. stand for Gerald Fitzpatrikand... so if he played as a duo with PF,it could sound like that joke about the two gay Irish dentists,or as in this case ,guitarists?...(Gerald Fitzpatrik and Patrik Fitzgerald)....i titter every time i say this! Chuckle.