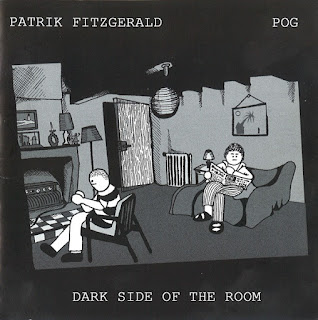 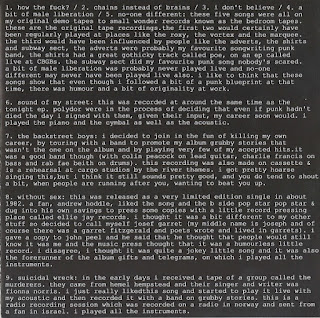 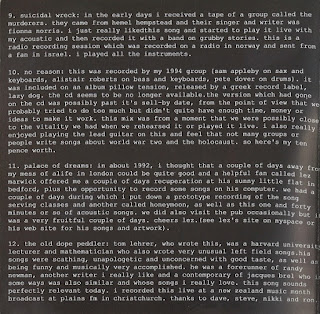 Patrik released a shared album in 2006, with someone called 'Pog', but Pog weren't very good, so i've took the Fitzgerald tracks and beefed them up with three Peel sessions, and a few oddities from Pat's long and fruitless career.So,please excuse me my rights to invoke my artistic licence,it makes for a better experience for you...my beloved public.
The cd-r insert notes are a good read,which includes the revelation that he didn't write 'Suicidal Wreck'.....it was by some unknown band called 'The Murderers'?
So read the notes as I won't write much,cus i'm probably gonna end up posting all of the lisping bard of bedsitland's back catalog.There are frequent humourous references in the notes to killing his own career,which is always a welcome approach around these 'ere parts.
"My beautiful Career" they often say...What career? As Patrik would agree,we,and everything we ever do are all going to the same place reserved for us in Oblivion.Whether you're Picasso or the homeless pisshead on the corner of the street begging outside the Off-Licence for small change.And at the end of civilisation as we know it......which,at the moment, is seeming to be sooner than we think.....we all will have created precisely...Nothing!
We are,each and every one of us part of an enormous Portsmouth Sinfonia playing on the deck of the Titanic.Time to realise that its too late to rearrange the deckchairs and just Play On until the icey black waters rise above our nostrils.End.

DOWNLOAD these odd ditties HERE!
Posted by Jonny Zchivago at 15:56

This is going to be a wonderful evening thanks to you! Fantastic. Never knew of the existence of much of this stuff.

Just one thing: Do you think "neo-folk" is a good attribute for this? To me, this is "singer-songwriter" stuff that results from "just playing the guitar and singing along", not intinding to be folky (or re-interpreting old folk songs) at all and not playing around with or even liking nazi symbols like the typical neo-folks do.

Just realised that "Goodbye Voyager" is not by Patrik but by Kitchens Of Distinction (with Patrick Fitzgerald).

The voice sounds a bit similar, though, and the song is not bad at all :)

I have this album (bought it off Pog) and they have really improved since then.