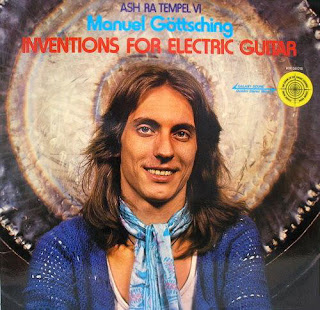 One thing about Manuel Göttsching is that he did have a liking for quality knitwear.Never too far away from a cosy purple sweater, never mind a lengthy nylon scarf, as pictured here in front of that standard prog rock accessory, a Gong.Probably one of the best/horrific album covers of all time.
The music,however, is the logical extention of that Pink Floyd slap back echo guitar/effect interplay so beloved of several Krautrock guitarists.Its hypnotic qualities cannot be overrated,have a go yourself, its easy,all you need is an electric guitar,an echo device and a sense of a 4/4 time signature,no rhythmic affinity necessary.Germans always find it difficult to stray from a marching beat,and this album is no different.Although its another proto-trance classic further cementing the reputation of Germany as the birthplace of House/techno.

DOWNLOAD inventions for an echo box HERE!
Posted by Jonny Zchivago at 10:22

I always appreciate your comments, but this sentence is downright stupid and racist: "Germans always find it difficult to stray from a marching beat". Hadn't thought that you maintain and even spread such unreflected prejudices. Yes, I know, you like to provoke, but there is not a tiny bit of witticism to find.

By the way, I totally agree with you on Mr Göttsching. Completely boring and overrated. The only song I have of him is "Day-Dream" from 1973's "Starring Rosi" which is quite sweet thanks to Rosi's voice. I don't even understand why you bother that much about listening to him and presenting his most private tootlings. But you *must* have a reason :)

Did you know this?

Found this LP, among others including Xenakis and the like, in a Vancouver alley dumpster in the 90's. I imagine I can thank CDs for that. Oddly, it was less than a block from a used record shop at the time that would've been all over the 30 or so records in said bin. And yes, keeping with the hippie drug cult theme, this was my only experience in Manson-esque dumpster diving.

I think its witty,i suppose you don't like "The Producers" either?Wolgang are you displaying another German stereotype of not having a sense of Humour and the inability to laugh at oneself? ;-)
References to marching are about as racist as saying the English have crap food and terrible teeth.....but i like racist jokes,so....yeah The english used to have crap food and terrible teeth,and still do to some extent, but i have noticed Germans no longer march,but saying predujice against the Germanic 'race' is racist is patantly absurd...i'm german ffs...anglo-saxon?
Feel free to call me a racist,'cus its true...its a human fallibiity, and of all nationalities Germans should know a little about that? Its a tribal animal instinct...as long as you admit it to yourself you can do something about it,like Alcoholics do.

Sad to say, I have all of Gottschings albums from 1970-75...i like 7Up and that starring Rosi one....but this sites mostly about the truly obscure,so the largely dull private tapes had to be posted.
I think he was copying Achim Reichel with this outing anyhow.

Not heard that Jerry Kranitz thingy will check it out.

I like germans by the way.The jury's out on Krautrock however.

Dumpster diving...yeah!
I've found such treasures in dumpsters...or Skips,as we call 'em in the UK.
I still have a great Tokai guitar that i still play...found in a dumpster....a 400watt per channel PA amplifier/mixer,shit loads of furniture,and junk that i make into sculptures to sell.....BUT...never found any records! What a find.
Xenakis in a skip!? Nice one.

"... the largely dull private tapes had to be posted."

That may turn out to be true, not yet listened carefully to most of this. I have had MP3s of the longer Ash Ra Tempel tracks on the Private Tapes for years, and I enjoyed them quite a bit as a supplement to the studio releases. Most of the installments in the set now sell for ridiculous $$$--for that reason alone I am glad that there are posted here and we can judge for ourselves.

Anyway, thanks for this and especially for the recent Beefheart boot bender!

Yeah, its all very nice really.

Wolfgang, take a stress pill and think things over. Is it racist to say a lot of music from the German electronic school does not often have a non-4/4 time signature? I don’t agree entirely, as I hear a lot of interesting beats and polyrhythms from Ashra, Cluster and Tangerine Dream. But ffs, it's not like saying, "Germans suck!"

Hm, I think Kraftwerk are racist - they exemplify the cold, robotic stereotype. Oh wait, that's kind of what they're all about!

As Johnny rightly says, even if you accept the concept of racism as it is commonly understood, to make a joke about Germans is clearly not racist, as Germany is a nation, not a race.

However! Science has proved that there's no such thing as race, so it's doubly bollocks:

Indeed Snoppy, generalisations are intended to focus ones gaze on a certain subject, and prove them right or wrong. I think it was the 'Marching' reference he was upset about,and who can blame him? Its a dark shadow that these poor creatures live under,remind them of it at ones peril....but as the land/scene that gave us the rudimentary Techno template, 4-4 time does seem to dominate the Germanic legacy somewhat?

That I don't deny. Techno, ja!

I had written this before the comments by snoopy and Anonymous but could not send it due to internet problems (luckily I could copy it to the clipboard):


Jonny, afaik "racism" today means being biased against other people because of their origin, "race", ethnicity or religion. I did not speak of the German "race" :) Apart from that, I agree with you on the fact that everyone is "racist" in a way because xenophobia is deeply engrained into our reptile brains.

Techno as such derived from the Belgian EBM and then "New Beat" and started there and in the UK (Tricky Disco, LFO, D-Shake, KLF etc.). Another way to see it is that the world-wide club scene at the end of the 80s mixed New Beat, House, Detroit Techno and Acid House to "Techno House", a term which was very commonly used in Germany in 1989. It is not a German thing at all. Nearly all the really good and influential techno came from elsewhere.

And again, I was not upset. I have a LOT of prejudices myself. But they are about stupid, egotistic, antisocial, narcisstic people, assholes, SUV drivers etc., not about nations. Stereotypes about nations are just outdated and boring, in my opinion.

Dag nabbit!... i tried to lay the blame for House and its derivatives, as well as everything else that went wrong, firmly on The Germans.....but failed!
I think the roots and the ideas for house in general were taken from Kraftwerk for an obvious example, E2_E4 blah blah blah,Belgians added the Techno element,with a bit of German new wavey groops like DAF, but Dance culture was definitly the fault of the UK, for which we are eternally sorry, as well as sorry for The Empire,and the Industrial revolution which will ultimately destroy us all!!!!....nonetheless,I'm quite happy for the UK to claim responsibility for Football,Punk Rock and Metal as its main contributions to world culture however.
other stuff;)....
The stupidity of racial stereotypes is what's funny about it all,its a kind of satire/irony,not meant to be taken literally.Some people mean this stuff.

Also not to be missed, but quite hard to find and officially released as a "Kluster" box set even though it had nothing to do with Roedelius and Moebius (the band Cluster, 2 of whom were in Kluster with Conrad Schnitzler) is this gem in which Schulze participated as a drummer (read down in the discogs listing for some credits) on at least a few of the tracks:

The group was also called "Eruption" which is the name I prefer to give them, although their leader the great Conrad Schnitzler would often use both names. Anyway, this isn't like his later synth music at all, it's very well-recorded live performances by a shadowy ensemble with shifting members playing tape loops, adding machines, cellos, along with drums, guitars, etc. Very dark and hypnotic (like a more talented Throbbing Gristle) this set is my nomination for BEST Krautrock live set/album of all time.

The FLAC links (officially sanctioned by Schnitzler for public sharing, though cryptically hidden and you'll have to add your own ".flac" endings to the downloaded files). Since the LP boxes were only 200 in number I guess Qbico doesn't mind people having these. Sorry for this to be such a long comment but this is a complicated release to explain (it's really like a puzzle, and these are most, but not all of the pieces... the others were on another Qbico box set and are meant to be sandwiched in between these tracks, since the live performances were over 60 minutes and each had to be edited down to 2 sides of a 40 minute vinyl LP). But it's just about the best late-night listen ever, if dark hypnotic avant-garde analog stuff is your thing.

And apologies, I didn't mean Schulze in the last comment, but Göttsching. Though I think they were both involved in some of the music I posted links in the comment to.

To be a cleverclogs: House was invented in 1983, if not earlier, in Chicago. This is supposed to be the first house record:

It was derived from soul via disco. The fact that black Americans started to use electronic instruments may have to do with the fact that DJs started to mix soul or disco with Kraftwerk, Giorgio Moroder etc., but the main reason simply is that the TR-808 and some synths became affordable.

At least that's what I have read, heard and concluded, but I wasn't there! :)

Woe is i! I've just had a sken at the Conrad Schitzler blogspot and all the links are dead (as of May 2022). Can anybody work some magic and hellllp?!?

Shocking Richie, this is what happens if you don't sort out your work before you kick the proverbial bucket. I'm working on this blog to carry on post mortem,but it does rely on other people is the problem there. I assume you have downloaded the Schitzler on this blog...i probably have more i could post,wuill have a look....I had to remove a few due to moaning from one of his record labels...that label by the freeman brothers of Ultima Thule non_fame.Still in print they reckon.