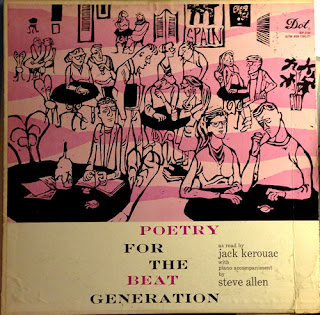 Too fucking cool for school again......you cats know I don't dig that wot is 'IN'. That what is 'IN' is certainly 'OUT' in my opinion, and Kerouac sounds like a bit of a prick to me. I wondered how long it would take him to mention 'Bird' (Charlie Parker,for us 'uncool' cats), and he gets it in after a restrained eight minutes of vinyl time.
I'm a Poet daddio,one who talks 'Hip', who can barely contain his own recognition of his massive importance,and,consequently, self-importance.He wrote a book that still adorns coffee tables to this day,and unwittingly created a stencil for many a wanna-hipster-be to colour in.Casual Sex,hanging out,drug abuse, travelling for no particular reason,writing poetry.....you too can be a Beat Poet,in fact you probably ARE a beat poet;alas,the poetry of this age is more Beaten than Beat.In the French language, 'Bite' (Pronounced Beat) is the word for Prick,so in fact this is 'Prick Poetry'....and why not?
The fact that Kerouac has remained well and truly "IN" fifty years after drinking himself to death,very kool(?),is a testament to his works ability to still appeal to a certain part of the eternal adolescents brain.In this age when everyone dresses as if they were perpetual rock stars,yet we're all so rebellious that we're still willing slaves of our own concepts,juxtaposed.....ah haaaa,yes i've got an English Literature A'Level,what you gonna do about it?.....with an insatiable desire to surround ourselves with 'Plastic Stuff',to enhance our own shallow plastic ego's. We need fantasies that pricks like Kerouac provide for us,and fantasies are just what they are. Travelling is eroding the things that we wanna travel to,while at the same time creating a personal carbon footprint large enough to last sveral lifetimes of rising temperatures.Stick to photographs).Promiscuous sex is at the same level as it's always been....no it didn't all start in 1959. Drug abuse is now exclusively the property of the underclass,who can't afford a can of beans but can effortlessly chase the dragon in front of their plasma screen televisions watching Celebrity Love Island.The very same 'Underclass' are also the ones who are writing the sixth form poetry with a beat,now cleverly rebranded as Hip-Hop culture;the Culture part being somewhat of a misnomer.The Beats certainly has one over the Hip-Hop-hippity hop bop sqwiddely pooooow crew,comfortably outscoring the tracksuited rhymers in the realm of the sartorially elegant. This lot are certainly 'The Beaten Generation' for sure......yes even fucking Stormzy! FFS!
In its way, this album from the king of the Beats, is as funny as any of those many Beatsploitation releases in the same year of '59,and I don't mean Kerouac's lame attempts at humour either.It may have been fresh in 1959,but sixty years hence,you just can't comprehend if he was serious or not? I mean did they really think that Dave Brubeck was the swingingest?

DOWNLOAD the latest slagging of the beaten generation HERE!
Posted by Jonny Zchivago at 07:43

'I dig this grimy town, the pimps, the whores, the punks, the beats. No place for squares Jonny.' It's enough to make me move to Hicksville and bury my head on the fucking sand, dig? I'll never be cool enough, which makes me so happy I could just shit. I bet this is a hoot. Of all the beats, Jackie K always appealed to me as the biggest clown in the joint.

You're sooo Out you're In rev baby. I'm gonna split the beatnik joint soon daddio. Headin' for the unfortunate waters of the birth of Hip Hop,the blame for which lies firmly at the door of the late fifties hipster. I can feel the venom risin' in my veins brother!

I always found "On The Road" unreadable, tiresome hyperbole - if everything is "big", "beautiful" or "crazy" then nothing is really, especially as Kerouac is largely grooving on the big beautiful craziness of his own rather limited social circle. (I thought the same about "Howl" recently: "I have seen the finest minds of my generation," meaning Allen Ginsberg and his pals.)

Fantasy is right.
Kurt Vonnegut wrote a kind of a takedown of the over-drama of Howl. He points out it wasn't the finest minds, but those of his colleagues. And they did it to themselves. So, poof! No more drama.
Ginsberg, proud NAMBLA supporter, admits he had a few weeks extra unemployment checks, so he at least put it to some use.
Which reminds me of how the Calculus was created. Newton, sheltering in place when Cambridge closed during the Great Plague of 1664/65, began messing around and, Voila!
Here's to some degree of productivity during our Coronavirus exile!

I never understood the fuss about Kerouac either.
Thank you Jonny.

@philip johnson, indeed, I've always had a problem with anyone who thinks they are where its 'at' daddio.Self-congratulatory cliques, and anyone using the word 'Beautiful'.....i notice that is a favored adjective of President trump who's a bit of a beat poet himself,bordering on the surrealist. One could transcribe Donalds off the cuff remarks and unscripted interview material, and claim it as your own abstrct prose,or an undiscovered work by Edward Lear.

@northfieldhat so, are you suggesting that we use this 'lockdown' time to further the culture and science of the human race? According to most populist news outlets the human race are all gonna die,so we had better revert to using pen and paper to ensure that our inheritors,be they mutants or aliens, benefit from this golden opportunity.All this cyber stuff is gonna go Poof! too as soon as the power supply fails. All our finest minds' work, GONE........what a relief.A fine way to uninvent stuff, like the Atom Bomb, the internet, and Meat Loaf....the singer not the american delicasy.