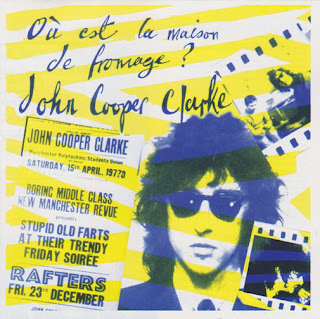 Staying on the theme of Manchester word-smiths,one must dedicate at least one post to the original ranting poet Johnny Clarke. Yes, he who saw how Bob Dylan dressed in 1966,and it stuck. Rarely seen without shades,he claims that he's photophobic,hence an excuse as to why he wears sunglasses in a nightclub. Having seen a sneaky photo of John sans lunettes du soleil,one can see why he's manufactured this story. Afterall, thats what he's good at?
Unlike American stand up poets, the British variety tends to lean more towards comedy as a weapon rather than shock and awe. I think Patti Smith tried a few of her pretentious poems at gigs in the more provincial parts of the UK and had the odd missile thrown penetrating the unenthusiastic reception outside the more arty venues in London. Nearly all these poets were from outside the capital,where there was far more incentive to do something that would help you escape the prison of poverty that places like Bradford and Barnsley had become by the winter of discontent.
"Où Est La Maison De Fromage?",or 'where is the Cheese Shop',was the only Cooper-Clarke album that actually captured him at his best,with his trademark 100 miles an hour word delivery in his unabashed Salford accent......likely indecipherable to most americans,so forget about 'Breaking America',as so many bands of that era seemed to want to do?

The poems themselves bursting with satire,endless humour and boundlessly clever couplets,backed up with John's endlessly witty repartee.
Future albums, with Martin 'I over produce' Hannett,and the Invisible Girls,Clarke had to slow down his delivery by at least 75%,so he became a different act on record than he was live.Although he did do a tour with The Invisible Girls,but this was something different and far less effective than his one man shows.As heard on the Peel Session included here.
Hopefully,before he dies, he will be given the opportunity to turn down the role of 'Poet Laureate'.

DOWNLOAD from your favourite cheese vendor HERE!
Posted by Jonny Zchivago at 14:21

Thanx 4 this much appreciated.

Unless i'm very much mistaken, tracks 29 -31 are from his 1st single on Rabid and 32/33 come from 'Live at the Electric Circus'. Oh, and permit me add a slight rebuttal in re: the statement that this mighty album was his only live, solo offering - i've still got my cherished 10" clear vinyl copy of 'Walking Back To Happiness', which gave my poor ol' mum conniptions when she overheard 'Twat'.

Yes the electric circus blue 10incher.I remember buying it....with my mum and dad.....obviously not his only live record...can't recall what i said,but can' be bothered to re_read it....maybe it was misconstrued?....i did suggest he was much better live and unaccompanied.