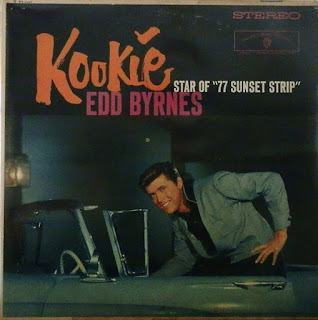 Well, I think this is one of the best albums ever made!? It sounds like a soundtrack to a John Waters movie,but is in fact a cash in release , staring the most popular character,"Kookie", from a detective show on late fifties American TV, "77 Sunset Strip".
Gerald Lloyd "Kookie" Kookson III (Edd Byrnes), was the rock and roll-loving, wisecracking, hair-combing hipster and aspiring PI who initially worked as the valet parking attendant at Dino's, the club next door to the detectives' office.
He was mentioned in the lyrics to Bob McFadden and Dor's "The Mummy" 45,when the Mummy in question came back to life specifically to buy a copy of "Kookie,Kookie (Lend Me Your Comb)",but people were afraid of him...all,except the hipster at the end....."Like....er... Help!"
All you need to learn how to be a Hipster is listen to Kookie, and that album on "How to speak 'Hip'" by Del Close and John Brent.
This is one of the Ginchiest records from the massive Beatsploitation tidal wave of 1959,....like...er... wow!
Stand-out track "Like,I Love You" is just the mostest daddio.A window to a world where life was almost perfect.
I may be stuck in 1980 for what remains of my lifetime (at least until COVID 19 gets me), but I really wish i was stuck in a groundhog day situation in 1959.Although,It just might be possible that I've just defined Hell!?...but it'd be just wild for the first few thousand years at least.
On a heavier note:

Important Die or DIY? Health Advice Annoucement: Don't Wash Your hands,touch your face,and other faces as often as possible,sneeze openly, and hang out in large crowds. Usually I self-isolate as much as possible, but on this occassion i may accept invitations to shake my tail feather at the hop,like normal people do.
I didn't think there'd be anything after Brexit and Trump to further lower my opinion of human society, but this blind panic about a less deadly than influenza virus has done it.I went to the supermarket this evening to get some toilet roll.....none left because the fuckers have been panic buying....no bread either!!!!?
So bad news for the amazon rain forest,as bog roll sales have doubled,those trillion acres of silent, birdless eucalyptus trees planted in place of rain forest in Brazil,will want to expand.Eucalyptus wood is good to making stuff to wipe the shit off fat human arses the world over.Pity it can't wipe the shit from their brains as well?
One bit of good news,though not,as yet confirmed by fact checker, is that China have banned the hunting and killing of wild animals for food or medecine.This includes the gorgeous Pangolin,which i try sporadically to raise awareness of in these columns. This is a desperate bid by the Chinese Govt to avoid making COVID 20 next year....if anyone's still alive to catch it that is!?


Tracklist:
A1 Hot Rod Rock
A2 Kookie's Mad Pad
A3 I Don't Dig You, Kookie
A4 Saturday Night On Sunset Strip
A5 The Kookie Cha Cha Cha
A6 Kookie, Kookie (Lend Me Your Comb)
B1 Like I Love You
B2 Kookie's Clock
B3 You're The Top
B4 Square Dance For Round Cats
B5 "A" You're Adorable
B6 Kookie's Boogie

DOWNLOAD a permanent lend of kookie's comb HERE!
Posted by Jonny Zchivago at 00:45

The poor innocent pangolin was even suspected of being a primary source of new corona infections. This new reputation might very well save it for the next few decades.

I thought of you when I saw that this was traced back to a pangolin.

Fuck those cunts who buy these fake medicines to make their wangs stiffer.

I probably had a worse view than you of humanity before this shit started, but I see we're on the same page at any rate.

@ C Fuck those Cunts indeed. Glad to hear there are more cynical people than me out there.The message is that the human race is the real virus on this planet. The more of us who realize this,the more likely it is that the other cunts will eventually change slightly...i do have hope,but not very much.
I'm trying to stay lonely but they won't let me.

@ expramtraveller ....yes i am hopeful on the pangolin front too,but as has been established ,the humans involved in their slaughter will not change their ways willingly.At least in China they know how to enforce laws...the mobile execution squad will be on those scumbag peasants trail.

I also thought of you when I first heard about the ties to the pangolin. And I've made Cabaret Voltaire's "Spread the Virus" my theme song for this month. Honestly though, I personally think I've said far worse things about humanity--i've even stated that the only value I see in the vast majority of people is in the diesel fuel I can render from their body fat. There should be some kind of competition.

@parmalee ....how much is that Diesel fuel a litre? Its dropping like a stone at the moment.....spread the virus.

He died not that long ago - I think about 2 months ago.