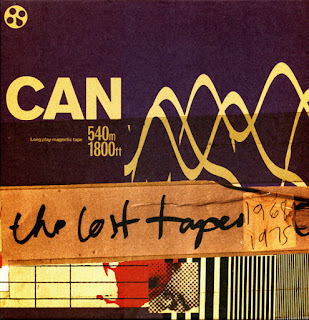 Back in 1980, I'd heard a lot of persons in the music biz name dropping CAN, and how good "Tago Mago" was.So,impressionable young man that I was, I made my way to the 'European Rock' section of 'Revolver Records' in Leicester market place, opposite Lineker's Fruit and Veg stall; to seek out the aforementioned "Tago Mago"....of course it wasn't there....long deleted.Just a couple of late period albums,one of which was "Soon Over Babaluma"....I liked the cover so i stumped up the cash, and took it home eagerly.Played it, and it was a bit Shit!.....I didn't give up, as everyone said that Can were fucking brilliant, and found a copy of "Ege Bamyasi", which I now know to be better than "Tago Mago", and heard a well proper example of the art of drumming for the first time.The funky drummers of the Post-Punk period were a pretty clumsy bunch.Yes, Can were indeed 'Fucking Brilliant'!?
Now back to explaining where Eno nicked all his idea's from.....If for some weird and unexplainable reason you didn't know, Holger Czukay , he of ethnic tape fusion innovation fame via the 1969 album 'Canaxis'; was the bass player in this incredibly influential post punk bands pre-punk band.....namely, CAN.
They gave the world endless repetition, funky drumming Germans,and basically how to make a groove interesting. The influence on PiL and The Fall are obvious, and their echo is heard in many of those groups from 1978 onwards.
Basically,CAN relied greatly on Drummer Jaki Libezeit and to lesser extent on the two vocalists Malcolm Mooney and Damo Suzuki. Irmin Schmidt(keyboards) and Michael Karoli(weedy guitar) added the noodles to the dish, and frankly, like noodles, would not have been missed if they never turned up. Czukay was important only in his post-production work in the tape splicing room;....But Libezeit's busy metronomic but loose skin work could well be the best of all rock'n'roll time?
So everyone knows CAN's classic string of albums from the early seventies don't you?.....so here's the stuff that never made it onto those records.All now rescued and tarted up for the CAN fan.
There's some great stuff on these three cd's, including the very impressive lyrics to "Waiting For The Streetcar", where Mooney manages to chant the song title 170 times!?...(don't worry, I didn't count 'em, but some other sado did!)
There are a few proto versions of Can classics, for instance - Vitamin C (Dead Pigeon Suite) and Mother Sky (On the Way To....), and some superior live stuff, and plenty of unreleased jams that escaped the razor blade of Czukay.Quality control had to be paramount back in the days of the forty minute LP.
I wouldn't say this was better than "Tago Mago" or "Ege Bamyasi", but its certainly better than "Future Days","Soundtracks" and "Monster Movie".....and pisses completely over anything after 1974 that they ever did!.....including the Suzuki and Mooney-less "Soon Over Babaluma"(1974).

Thanks for this. But Future Days is the business!

Well its always the album that splits Can fans isn't it? I reckon i'd sooner listen to the lost tapes than Future Days. Don't think I've heard Future Days fro about twenty years however!?

Gotta say, Soon Over Babaluma might be my fave Can record but I like em all up to and including maybe half of Flow Motion. I've never listened to Rite Time however.

Well, surprisingly, I too have a soft spot for Babaluma, like all the records i bought and didn't like when I had no money.It takes me back to a time and place, unlike TAGO mAGO. Whether its good or not, I can't really say, because its too subjective a matter for me. I suspect it is in the lower half of can's repertoire.....but that doesn't mean you can't enjoy it.

i second babaluma.their last album with expansive type music on it. give "chain reaction/quantum physics" another spin. the way quantum is a slow decay of what came before is...

I'm the odd man out who believes Saw Delight is the most unfairly underrated album in their canon. I love the African derived rhythms that run throughout it, and it's arc from beginning to end flows as strongly as any of their more lauded releases. I call it my favorite Can record, say what you will.

That said, the final comp in question here is largely unmemorable to these ears. Irmin Schmidt has assured us it contains the last of any extant studio recordings they'll release and I believe him, as the marginality of much of what's on offer here eyes the bottom of the proverbial barrel indeed.

Thanks for the post and all the "and Eno" stuff too.

I actually like about half of "Out of Reach" and that record is pretty much despised by every can fan including the band themselves!!

...or maybe two bad apples in a barrel.

It took me about 20 years to figure out that Ege Bamyasi was better than Tago Mago--how long you? I always felt kind of ashamed about not understanding the importance of editing for so long, but... yeah. Still, I find myself listening to Delay 1968 most of all.

Also, on post-Mooney/Suzuki Can: it's hard not to like some of those goofy mid-70's television appearances.

To answer Parmlee's query....as I bought Tago Mago a good couple of years after Ege Bamyasi,the thrill of the new blinded me to the possibility that it wasn't as utterly fulfilling as Bamyasi....so around the mid-nineties, i found myself playing EB as my Can album of choice....although TG has the better cover art.

I think Ege Bamyesi is the only album with continuous high standard tunes. Future Days for example consists of some incredibly great tunes but the b side is far too lengthy, same problems with the live recordings. So the most remarkable discoveries are the soundtrack recordings on Lost Tapes, which are variations of tunes otherwise released on the albums.
There was no prominent singer or solo guitar wanking with a replacable backing band but a collective interaction (That´s what I like about early techno, the absense of rockstardom. Just some music on a whitelabel which you either like or not) I think that made their sound so outstanding.
I still quite like Babaluma if there wasn´t this horrible last track on the a-side (see above). The strong german accent of Michael Karolis vocals must have been quite disturbing for native english speakers, but again I like this denial of rock stereotypes.
By the way, you once asked for favored rhythm sections. That definitely has to be the unique Jaki Liebezeit with Jah Wobble as featured on the early Holger Czukay Albums.
Sorry for poor Dexter, Mr Z

Can't argue with all that Herr A....the Wobble and Liebezeit dreamteam.
Thanks,Dexter is missed terribly,another hole in my life,accompanied with buckets full of illogical guilt!

Holger Czukay has been found dead in his home in Weilerswist near Cologne yesterday.

gracias gracias de verdad. do you have the lost tapes of maniax??? thanks

Thank you for your insightful post, and also the album link.
been looking for this album for a while now, and i do believe that i would've never found it without your help.
regards, Mark.