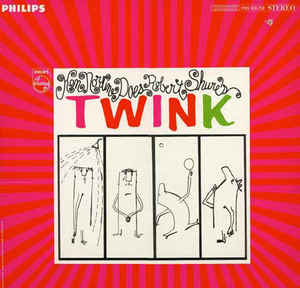 The unfortunately titled "Twink",first published in 1957, was a popular selling pamphlet of quirky poetry by someone called Robert Shure, hence the title.
A "Twink" is, nowadays, Gay Slang for a young homosexual male with attractive, boyish qualities.Ooh-la-laaaa!?

So when it says Ken does Robert,one assumes he means Ken reads Robert's Poetry,rather than anything sexual. Or maybe, as the Twink in question is referred to as belonging to Robert Shure,maybe Shure was a fifties Jeffery Epstein who provided young boys to c-list voice over artists to provide sexual favours? Maybe this is why Nordine did a recorded version of Shure's pamphlet,as payment,in kind, for allowing him to bum the boyish young victim provided by the poet in question.
As this work was made well before the term Twink was misapropriated by the Gay scene,in a more innocent time, I suggest everything i wrote before this sentence was likely just an amusing fantasy.
In fact,the reissue of this album was renamed "Wink" at the request of the author, Robert Shure.The reason for which I think is glaringly obvious.Its not beyond the realms of possibility that some poor unsuspecting homosexual had previously purchased either this album, or pamphlet, rushed home in a state of semi-arousal,only to find the contents empty of references to sodomising young boyish men,but full of extremely unerotic ,and downright Silly poetry.They may have even noticed the poem called "Queen" to further enhance the need to purchase such literature, full of gay abandon,to use these words as a back drop to 'knock one out' upon his eager return from the literary emporium.
In true space-age batchelor pad style, Nordine uses the stereo spread to appear to be talking to himself with one voice recorded dry, the other recorded with effects.It sounds a bit like the voice one hears during a sudden attack of paranoid Schizophrenia. In between every track ,for some reason, there are different styles of tinkling bells,as if entering a small Haberdashers every minute for half an hour.
As always, Nordine's silky baritone makes this a soothing but surreal,and accidently psychedelic nostalgia trip.Like watching a Mr Magoo cartoon,but in this version Mr Magoo is hard of hearing rather than myopic.Gets him into all sorts of trouble it does.Mr Magoo mishears himself into a Gay sex orgy as the Gimp and gets topped by Waldo. That episode won an Emmy in that famed alternative universe that we visit often on here.

DOWNLOAD from your very own twink link HERE!
Posted by Jonny Zchivago at 09:49

Thanks for the introduction to Nordine. He was one hip cat.

Yeah Twink, drummer for Tomorrow,Pink Fairies, and was in the short lived 'Stars' with Syd Barratt.....i don't think Twink changed his name to Wink in the seventies, but the temptation would have been there had he know of its connotations.

I hesitated at doing too much Nordine, because i thought everyone knew about him. This all came from my Incredibly Strange Music/ Exoctica/Easy listening obsession in the 1990's.
There's a lot more than i'm gonna post, and downloadable radio shows too...i'll put a link here.

Cheers for the link to the radio archive. Been listening to some of "Colors" on YouTube as well, made me think of the last couple of seasons of Mad Men!

Dunno how Nordine managed to slip under my radar until now - probably cos my musical interests have skewed towards the word-less for so long. Anyway, thanks again.

I'm pretty sure Twink the drummer WAS a twink, or at least looked like one. And a group calling itself "The Pink Fairies" must have had dodgy connotations even in 1970. In fact the surprising thing is that it took until David Bowie for homosexuality to become mentionable in rock and roll.

The story of Twink, the drummer, gets kinda convoluted, as he is now known as Mohammed Abdullah, and converted to Islam 15 years ago. BUT, he still records as Twink and occasionally resurrects the Pink Fairies.

Sounds like he should have renamed himenself Twat by the sounds sof uit.

@ Philip Johnson... the TWINK fairies..... for me the moment homosexuality entered my existence was via The Sweet.....i watched that life on mars Bowie thing with my parents and there was silence...with the sweet my fathere left the room under a hail of expletivevs/.

Hey I just thought of a cool one you might like to put up on your blog, Henry Jacobs, who did the Shorty Petterstein LP and they've released some more stuff now also.

The real diamond would be if you could get ahold of his old radio shows during the beatnik era, Supposedly someone in a band bought his old house and found a trove of his old shows under a floorboard but the dick didn't even release them, evern in digital form. I'm sure they must be great like Nordine's radio shows!

Meat Balls and Chimney are kind of suggestive too.

I always on the lookout for something similar to Ken Nordine and Twink (or Next!) might just be my favorite of his. I mostly unaware of british gay slang so I've never assosiated the Twink with "young homosexual male with attractive, boyish qualities" - and just thought of it as a wordplay combining "twin" and "think". Anyway Robert Shure's poetry is such a perfect match for both Nordine's voice and mindset that its almost hard to believe its not written for him (or by him) specifically. As a full album in a comparable style (well to Word Jazz) I think Kenneth Patchen With the Chamber Jazz Sextet comes close + maybe Peter Wyngarde.

I rather think that Twink is an international 'gay' term. You should hang out down the gay club more often.....Peter Wyngarde,despite the rampantly camp heterosexual character he plays on that notorious album he made ,was as gay as they come.The discovery of which ended his career.Even my mum fancied him!

@northfieldhat....phwaoooar, up the chimmney guvn'r, said Burt the cockerney sweep from mary poppins...now we know what he was on about;and he obviously didn't have a glad eye for our maury.

@ parmalee....so Twank is now a muslim is he?...if that isn't evidence enough that Drugs are bad for you i dunno what is. As Homosexuality if punishable by beheading under Sharia Law, he better keep the fact he's in a group called Pink Fairies, and what his stagename means in modern day slang,very quiet!

What a valuable piece of data.Next time I'll think twice before calling anyone a twink. I may avoid getting hit by makeup or other artillery.

@ anonymous ...careful with that kind of talk, i've already been called an Homophobic Fuck on a Discogs forum in Discogs...for having a sense of humour it seems. It makes a change from being called a racist, or a communist or a fascist i suppose?

"Rape" was my introduction to Peter Wyngarde and I read about his "gross indecency with a crane driver in public toilets in Gloucester bus station" ca. five minutes after that - and to my knowledge I've never seen him acting before or since, but he has a fantastic voice.