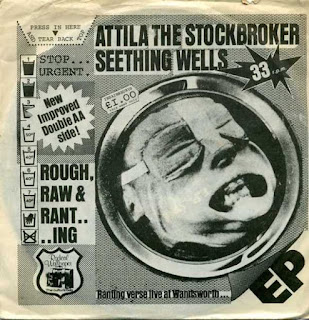 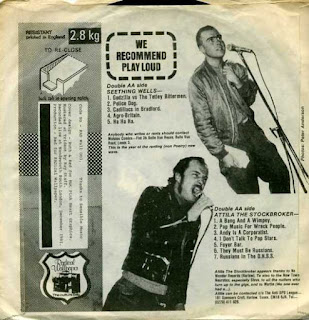 A very English thing it seems was this 'Ranting' phenomenon from the cusp of the eighties.A mixture of comedy and left wing politics,its always left wing.I would have enjoyed seeing a Thatcherite Ranter, berating the utopian socialist disneyland these silly chaps pushed at every opportunity.Full of criticism and no real answers. They still managed to buy stuff and be part of keeping capitalism going I wager.They wanted a whole quid for this product I see,which are probably being sieved out of the atlanlic in the gills of the last living Cod as microplastic.But I'm righting that wrong now, by offering this for free, and no plastic waste will ever touch the waters of the planet as a result of this noble transaction.
Punk rockers with moustaches?...a rare commodity.I notice that Seething Wells wore his moustache above his eyes;a very interesting fashion statement?
Seething Wells was by far the most listenable Ranter.He was actually quite funny,and was mainly concerned with social commentary rather than boring us with religious communism.
Seething, or Steven, Wells ,is sadly no longer with us.Non-Hodgkinsons Lymphoma did for him i understand? Which was a bit awkward as he did have a poem that could be adapted for various targets,in which he Ranted that he 'hoped they die of Cancer'. So, that poem became a tad ironic post-mortem,especially as most of his targets are still alive,and those that aren't didn't die of cancer, but he did!
Attila The Stockbroker's side of the EP,is probably the best thing he ever did...and thankfully,he appeared to leave his Mandolin at home that night!

Seething also wrote some astute pieces for the NME as Susan Wells if my rapidly ageing memory serves... Thanks for this!

This ranting thing WAS English? Still is seems to me. See: Sleaford Mods.

Largely NORTHERN English one has to say....Sleaford Mods...son of Rant.

...although there is that awful ginger dumpy bird who rants in the modern idiom, with pricks like me saying she's the rebirth of the right-on Rant!...she is of course shit,and sickeningly self fucking righteous...and i'm proud to say i have no idea what her name is....was....sorry for using the wrong tense earlier.

Don't know the female you refer to. So East Midlands doesn't count in the Rant sweepstakes then. You're English and I'm not so I must defer.

That said, I do like what sons of rant Sleaford Mods do. Enjoyable listening in the car to these ears.

East Mids counts in everything,as thats where i'm from...but time scale disqualified the mods as pure rant...thats early to mid eighties only.
The Bird is called Kate Tempest...although the description does sound like it could be Pam Ayres but with one difference..Pam isn't crap.