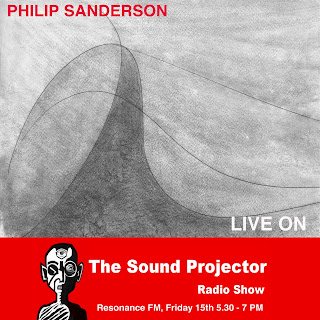 Still in disingenuous glowing tribute to Genesis P(hilip)Orridge mode, one is sticking to the persons responsible for the dawn of UK Industrial music,the clown prince of which was Neil Megson himself.....he's dead if you didn't know.
Next up is a live session one of the leading Industrial era Philips,the Sanderson one in this case, did earlier this year for Ed Pinsent(who?) and his Sound Projector radio show. Four instrumentals all recorded with his own custom made soft VCS3!?....what a clever boy?

01 A Glass of Darkness
What the Bladerunner soundtrack could have sounded like if they had employed Sanderson and not Zimmer.
02 Au Coin du Jardin
Tales of fake archaeological digs.
03 Scream Test
Horror in one take.
04 The Golden Fleet
Some Krauty goodness for Christmas.

DOWNLOAD some projectile sonics HERE!
Posted by Jonny Zchivago at 00:10

Do you have any Ed Barton you could share?

I do,but what the Hell Edward Barton has to do with this post on Philip Sanderson I can't guess?
You'll have to wait thoughgot loads of stuff to post...although as I'm in lockdown because of the virus i may be posting several things a day.

Think I like this one more than the song cycle you posted before, had my tiny tinny speakers rattling. All hail the Ps.
The New Stockpilers

Indeed Anon, i'm sure PS would agree with you....although never play this stuff on laptop speakers.....the bass man, the bass!
Just going to fight with some old women over the last pack of scented toilet paper.....lavender flavour.....i'm gonna kick those bitches arses!

In response to Ed Pinsent (who?)...Ed has been running the Sound Projector radio show on Resonance FM for many years, it is a kind of audio accompaniment to the Sound Projector magazine which reviews all things experimental, noise, you know the kind of thing. Aside from that Ed also does rather fine comics I can recommend The 12 Labours of Windy Wilberforce. http://comics.edpinsent.com.