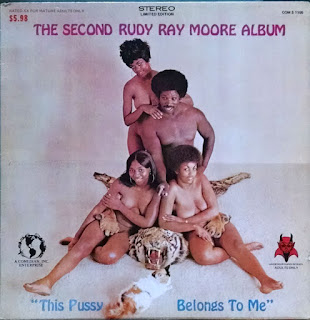 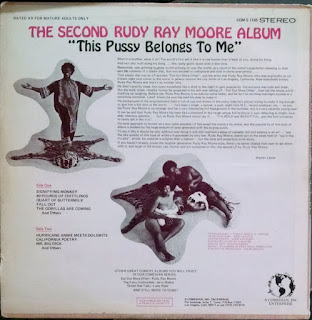 What the fuck-ing hell is this?????
This is filed under "Comedy",in inverted commas, but is about as funny as a dose of scabies,bordering on as funny as cancer!
The reason this utter shit is on here is the influence these extremely ruuuude black comedians had on future Hip-Hop artists. Rudy Ray Moore's delivery is in the form of a rhyming monologue, with sweary words,and frequent graphic references to certain sexual acts and body parts.
The cover art is as jaw-droppingly purile as the ...er...music???
I'm sure it would probably make one laugh heartily if I could understand what the fuck he's going on about!?
Sure Black dudes got game, but they sure as shit ain't comedians........
I generalise of course,but i'm struggling to name a Black comedian who's actually funny. That geezer from 'The Mighty Boosh' and 'The IT Crowd', Richard Ayoade, is a wheeze,and rather more subtle than Rudy ray Moore,but does he qualify as 'Black'?
The cover says buy me,but the contents should never have been let out,to influence the wrong kind of rapper early in their impressionable years.
Evidence:
Snoop Dogg said: "Without Rudy Ray Moore, there would be no Snoop Dogg, and that's for real."
Christ! If only i had a gun and a time machine!?

Tracklist:
A1 Signifying Monkey
A2 40 Pounds Of Chittlings
A3 Quart Of Buttermilk
A4 Fall Out
A5 The Gorillas Are Coming, And Others
B1 Hurrican Annie Meets Dolemite
B2 California Poetry
B3 Mr Big Dick, And Others

DOWNLOAD your own pussy HERE!
Posted by Jonny Zchivago at 00:14

So, nothing about Neil Andrew Megson? Why are you not talking about this? I love your hot takes!

I don't have anything to say,yet......I did an Obituary for Mark Edward Smith i suppose,Gen wasn't as loveable as Mark,but rather influential to say the least. Neither of them would approve of fawning over their deaths....I probably will, 'cus from midday tomorrow there'll be soldiers at the end of my street asking me why i've left the house.( i live in France,lockdown starts today!)...so i got nothing to do except write shit on here!Look out gen i'm coming for your soul,and its Pouting Cavity's fault!

You never cease to surprise me Jonny. These last posts are no exception. Thank you. And sorry to be the bearer of bad news but it looks like the m-fire police got to this file... Appreciate all the hard work you do to share this collection with us, and especially for including your unique insight along with each release. I love it. I know you won't let those soldiers push you around but be safe out there my French friend. Chris

Maybe it's just me, but the link seems to have been removed by Mediafire?

Yeah I forgot that any mention of a ladies lulu gets a warning from the christians of Texas,and darn good blocking....re-upping it to Google who have no principles at all.

Too risqué for MF?!? Say it ain't so Jonny! Perhaps you were too honest in naming the file? Perhaps there’s a red flag of some kind hanging over poor dead Mr Moore. I s'poze I should be impressed that he's still banned in some quarters. I had a friend who was a fan of Rudy Ray. and swore Dolemite was the 2nd coming. Hope the file can be resurrected as well. Dang, I'd hate to miss out...

I heard about the lockdown JZ. We'd probably be there with you, but you know, our president is rather feckless. Mayors and governors are BEGING donald john to do SOMETHING, but he's all 'deer in the headlights', reading off crib notes and giving himself a '10 of out 10' score for how he's handling the pandemic. Christ... Re the new file host, Google, principles, ha, yeah. Thanks.

Another one I won't download and listen to. But thanks for pointing me to Richard Ayoade, he is a likeable and intelligent and even funny guy.

Whatever you thought of Gen P, he was such a significant figure on this scene that you feel a sense of loss at his going, or I do anyway.

Thanks for a great blog! I hope it's OK to ask here. Would you happen to have Cardboards' Greatest Hits Volume Two (Mom's Records, 1981)?

Fucking hell Thomas..i think I doo...but i won't be posting it until i get back on to an electronic eynth punk angle.

I said i was gonna do an obituary for Orridge didn't I?...utilising unreleased works by the two Philips..Sanderson and Johnson!!!...interrupting my spoken word vibe.

Dr. Ben Carson is pretty funny--and we all totally know why Trump put him in charge of the Housing and URBAN Development department.

Here's the good doctor coughing into his hand at a Coronavirus conference:
https://www.youtube.com/watch?v=G2Y90mF87J8 Brilliant!

I live to the see trump or steven mnuchin on a ventilator, 'cept I wouldn't want to deprive anyone else from such an apparently limited resource. 'It's nothing. I don't think it's going to be too bad. It's going to bounce back stronger than anyone's ever seen. It’ll be perfect. *cough cough*'

"struggling to name a Black comedian who's actually funny."

I realize you fancy yourself the ultimate "Too-Cool-For-School, Mr. Badass, Tells It Like It Really Is, Man" guru and all that - but sometimes you really out-do yourself in your utter douchebagginess.

@ Mudbone....Richard Pryor!?....about as funny as the aftermath of the covid19 outbreak is going to be.
You've even managed to outdouchebag me and even outdouche yourself you silly douchebag you.

I can't believe someone just called me a douchebag,its taken decades,but i've achieved it at last!

The best way to approach RRM's work is from an indie filmmaker perspective; his two movies "Dolemite" and "The Human Tornado" were box office mega-smashes produced on a shoestring by Moore & his equally inept cohorts. No black filmmaker had ever succeeded the way Moore did at the time, although his records largely paved the way for his success. Audiences had a good idea of what they were going to get, which is why they lined up for blocks to see his movies. The first film (Dolemite) is basically a greasy, violent and ridiculous blaxploitation piece with standup comedy bits thrown in. But the sequel Human Tornado definitely fits into the psychotronic category, it's so bad on a technical level but a completely entertaining self-parody from start to finish. Anyone who can sit through a Russ Meyer flick might actually enjoy The Human Tornado.

Moore actually started as an R&B singer in the Little Richard/early James Brown vein and released a number of singles. Not particularly good but competent enough. And to me he always seemed slightly mentally challenged. But a historic underground figure with a large impact on black American popular culture, and much funnier than Richard Pryor.