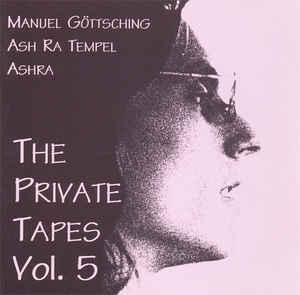 Out comes the echo-box again,as Manuel strives for that Dave Gilmore sound once more.
Oh yeah!..There's a live Ash Ra Tempel track recorded in Cologne in feb 1973 that has its moments,but thats about it for volume 5.

DOWNLOAD and give yourself five HERE!
Posted by Jonny Zchivago at 09:59

I think Gottsching did it before Gilmour.
Inventions for electric gtr Recorded July-August 74 in Studio Roma (Berlin). The Wall, where he really made it a thematic element, began recording Jan 1979. Manuel NEVER gets that great Gilmour playing tone, though.

Nah! Gilmour was doing this in 1968/9, and Syd was straining his echoplex from 1966 onwards. Manuels tone is awful I agree. I used to refuse to listen to Pink Floyd mark 2, but now i have woken up to their greatness.Gilmour is one of the few truly melodic and aimless solo free, lead guitarists from that era.Georgeous stuff. I'd post that massive Pink Floyd box set, but i'm sure i'll get done for that,so if you aint got it, it'll have to be a private transaction....don't buy it ffs!

ps Gottsching wasn't even first in germany...Achim Reichel was there in about 1971...A.R.(Achim Reichel) and Machines is up next.

Thats 'yes' to what exactly?
if its box set stuff i can upload it to zippyshare and paste the links here.