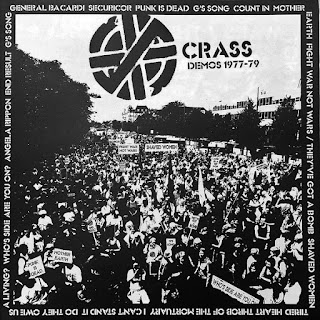 Cults, generally, don't allow room for divergent ideologies,or blatant displays of individualism.Neither do authoritarian regimes, or ,as it seems, Anarcho-Punk bands,and the communes they invariably squat in. They are so convinced that they are right that they feel justified in barking their soapboxy lyrics, which frequently use couplets that tend to rhyme words like 'National Front' with 'Cunts', (National Front Bottoms?) and other, less subtle, excuses.
They like the idea of individual Freedom, with no leaders,except that they all dress in the same uniform,the groups all sound the same, and Crass were the de facto leaders of the Anarchists......an oxymoron I suggest?
One could also rhyme 'National Front' with 'Cult',or, as I prefer, 'Cunts' with 'Cults',or Cunts in Cults?Namely the trust-fund anarchists,read as 'Hippies', clad in black,living in their comfy bubble of self-righteous idealism before they take up that offer to work for the family-owned investment brokers firm at which Pater has kept a position open for you once you'd gotten over your angry years........oooooooooh ain't I cynical?
Musically, I used to think, as with Bob Dylan, that their songs were better played by someone else;but, also,like with Dylan, I now think the opposite.These Demos, especially,have that shitter than shit-fi sound of cheap overdriven transitors,and the very worst possible drumming. The best version of the classic "Do They Owe Us A Living" is here......(sigh!)if only they'd have stopped there?
I thoroughly agree that'They' DO ineed owe us a living.In fact I agree with most of Crass's preachy sermons on the worlds ills.I just think the music is rather shite,incredibly boring,with jolly silly angry yob vocals from the token working class person in the line-up,aka the 'Indian Of the Group', Steven Ignorant,with emphasis on the 'rant'.It just gets tiresome.
If they had a little more light,shade,space and variation in their output, we'd probably all be anarchists by now......and not all would have a wardrobe full of different shades of black.

DOWNLOAD the cult of crass HERE!
Posted by Jonny Zchivago at 10:44

Haven't listened to Crass in years, but I still get why I liked 'em in the day. You make a good point tho’, not much room for nuance or reflection or individuality is there? March in line or fuck off. Contemporary politics seems to be nothing but that. Then again, when hasn't it been the case? To bore everyone with a favorite quip: “The feeling of our being sincere is so not dangerous as the belief that we are right. We all believe we are right, but we believed the same thing twenty years ago and we know now we weren’t always right then.” Igor Stravinsky

Like you, I generally accepted their ideals and politics. But I also like the music, it makes me smile for some reason - it's often very jolly. Distinctive too, eg the opening bars of Banned From The Roxy with that ultra-scratchy guitar. Thanks for posting this!

Well, we don't get many Stravinsky quotes round these here parts,but this one is right,or maybe not that right in hindsight. ;-)

Yes Andy, i'll give 'em the thumbs up for being instantly identifiable as 'Crass'....despite a thousand other soundalikes muddying the anarcho-waters.
They were also unsung standard bearers for the DIY aesthetic.

The documentary film 'There Is No Authority But Yourself' is a good watch, if only to see how differently Penny Rimbaud's idyllic-looking "Like Punk Never Happened" late-hippy life has turned out vs that of still-up-against-it token-oik Steve Ignorant.

I can think of quite a few monstrous sorts who'd agree with the title's sentiment, and who would happily consign Crass's ilk to a mass grave.

I've lived my life along the "There is no authority save myself" lines,so can't disagree with that....but although I frequently slag Crass off, i'm glad they existed.Anything that annoys me,in intelligent ways, has to be a good thing. Can't stand opinionated tossers like me who can't take it back.