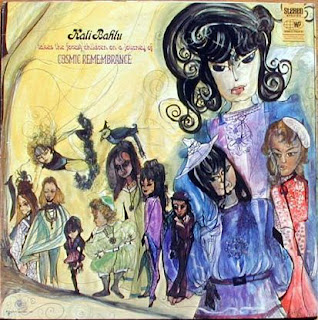 Kali gets a telephone call from Buddha(pronounced 'Boodah'), who is drinking coffee, and she exclaims excitedly that "BUDDHA drinks COFFEE?!"......one among many startling revelations about the speedily oncoming 'After-Life'.

Kali believes that if you're 'good' you'll get to live again as a pretty butterfly or a Bird of Paradise.....a grave pity then that the insect population, butterflys in paticular are 80% down due to 'Bad' human activity, and Birds of Paradise are verging on extinction for the very same reasons.Maybe its because Humans are soooo naughty that they aren't being reincarnated as Butterflys any more, except Kali of course, and its therefore a savage circle spiraling into nothingness.
There are still lots of silly Hippies like Kali who comfort themselves with wet philosophies like this diluted version of Buddhism,where everything's going to be fine, and NO,we're not all just biological machines waiting for the Off switch to be flicked by mother nature. Its a comforting thought that we may be reincarnated as a fluffy bunny wabbit,but the reality is, sadly, that you'll be munched down as food by a passing Fox the minute your fluffy head raises above the surface.As for being reincarnated as a higher human,there must be a massive queue in the waiting zone for your assigned higher form of sentient Human, because there are more people alive right now than have ever lived.....so much for the one in one out theory of rebirth.
None of this enters the fluffy dream world of Kali Bahlu, whoever she was,or is now; spoken in the voice of a slightly sarchastic sounding little girl,or, childrens TV presenter, backed up with shimmering sitars and special effects.
The lyrics of her infantile peons to the after-life make a primary school girls creative writing classes recollections of 'What I did On My Holidays' seem almost Shakesperian in their comparative complexity.

DOWNLOAD a message from Buddha and the angel Liesle HERE!
Posted by Jonny Zchivago at 17:38

Thanks for Kali Bahlu! Do you have her albums with Lite Storm as well?

SHITE!...you've reminded me!..i should have done this stuff with my Sai Baba post!....yes i have a couple of Lite Storm albums...Will post them next up.

Ah, yes! I remember this was the first thing I dl'd from Glorify The Turd (R.I.P.). I have fond memories of that blog, but man did this record blow. It's like listening to an indie art gallery owner try to stall the crowd before a show with pseudo-intellectual and metaphysical bullshit: boring at best, cringe-inducing at worst.

yEAH,after about 1 minute 20 you just wanna scream "Oh shut the fuck up for fucks sake!!!!!"...the only rival i can think of for scraping the stylus off a record award has to be Les Baxters "The Passions", if you've ever been exposed to that...with some bird called Bas Shiva moaning and screaming through various emotions interpreted via the medium of the ladies voice.

Yes this is batshit crazy stuff, and supremely entertaining. I was lucky enough to snag a near mint copy, with no cutout hole, off a record dealer's website for $4 ten years ago. It was filed under "easy listening" which it's certainly not. One thing I did notice though, is the sitar playing is very good, flawless you'd almost say. It's well-known that sitar is an instrument that requires decades of study to learn to play, having all those microtones that are so alien to Western music. So was it Ravi Shankar, the most renowned sitar master of all time, who played on Kali's loony album? I think it's quite possible, since Shankar also recorded for World Pacific Records in 1967, and was produced by the same Richard Bock who produced this record. He was probably too embarrassed by the end product to want to be credited on it, but it's not like there were many studio sessions musicians in California who could play a real sitar. George Harrison and Brian Jones had to struggle with the thing just to produce some basic sounds that were in tune. (Electric sitar, that's a different thing, being basically an electric 12-string guitar that's set up differently in order to produce an imitation of the sound).

Its odds on that Ravi Shankar is on this record.
Californian sitar players?...how about Bill Plummer? He's up next.
Gabor Szabo too?...both pretty terrible, but they only picked up a sitar in 1966 and stopped by 1970.....yep, just like understanding Rock'n'Roll, it takes a lifetime to learn the Sitar.

Yes! One of my all-time favorite "get stoned and laugh yr ass off" records. And while yes the sitar is great, what I really dig most here (besides Kali's "Judy Tenuta tripping balls shtick") is the recurring "wtf was that?!" sound of a reverb coil being struck. There are some seriously deranged lyrical bits here too. What's that part about Jeebus and Buddha sewing the planes (plains??) together? In any case, great stuff as ever. Thanks.

I used to think that she was having a laugh.....but, no,she was deadly serious. People like this exist. I too dig the WTF was that sound,like a slinky with contact mike sellotaped to it. Certifiable.